So, as I mentioned in my blog post on Friday, there was to be a launch party on YouTube by Uniden for at least 2 new scanners.  They said it would start at 12pm CST, but when I went to the link at the appropriate time, they were doing a 5 minute countdown, which was a little odd especially since it turned out it wasn't really a live broadcast but rather a taped video.  Anyway, the broadcast started and we were introduced to the new BCD436HP

Initially I was pretty excited, especially about the handheld one.  The unit size is about the same as my Pro-106, but the screen is much larger 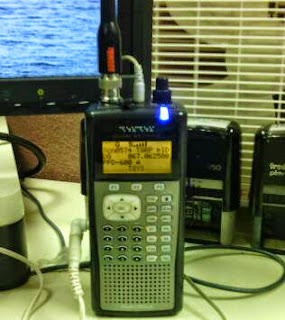 It also looks like a radio that police and fire use, which is pretty cool.   On Saturday I had been looking at the Uniden Home Patrol-1 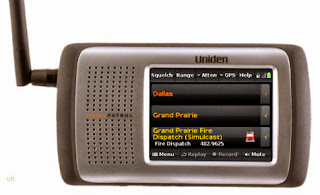 because I could take it with me and be able to program any zip code in and instantly listen to what was in the area where I was...perfect for traveling.  But then it turns out the new scanners are sort of a new version of the Home Patrol, which is what the "HP" means at the end of the model numbers.  Not only can you program your scanner by hand but also through the computer or you can enter the zip code of where you are and listen in.  Like the current Home Patrol, you can hook a GPS device and literally be able to drive from California to New York and never have to touch the scanner because the GPS will "talk" to the Home Patrol and change it as needed for each area you pass through.  Pretty cool.  The base unit of the 536 also comes with a wifi set-up where you can put it in one room and listen to it via a microphone throughout your house.  Pretty cool.  I'm not sure what the range is so you can probably go outside and do yard work and still be able to hear what is going on.  Unfortunately, that little feature comes with an additional cost and it's not something you can elect to have or not have.  If you want the 536HP, you have to have the wifi feature.  So, I figured I'd just get the 436HP when it came out in January.  But then, I was able to get my hands on the preliminary users guide and my excitement started to lessen.  I'm not a programming expert of digital scanners by any stretch of the imagination and even with using the computer to program it, it still looks VERY complicated.  Add to that the WEEKLY database updates and I'm thinking I'm not liking this thing so much anymore.  Sure, I can use just the zip code feature to find what I want to listen to, but I'd still have to update it weekly and I don't want to do that nor do I want to spend that much money on something I can get for almost $100 less (the Home Patrol).  Then...someone who lives in Arizona expressed concern on how it would handle Phoenix PD's Regional Wireless Cooperative (RWC) radio system.  The RWC is made up of 19 police agencies across the county and each has their own radio tower system and talk groups.  It can get quite confusing.  The guy expressed concern that the new radios could even handle it because of the interoperability, which made me start to get concerned, too.  I'm not real sure where his concerns lie since you can use the software to program it like you can the Pro-106, but the whole thing is enough to make me wait to see what Whistler Group comes up with.  It's already been said there will be a replacement radio made for Radio Shack's Pro-106, it's just a matter of when...and for how much.  Whistler bought out GRE and GRE made the radios for Radio Shack and their first scanners to hit the market will be to replace the two digital and two analog radios that were most sold at Radio Shack.  I guess we'll have to see.

At any rate, I'm anxious for these scanners to get going and hit the market.  The new Unidens won't be out until January 2014 and I have no idea when the new Whistler ones will be out other than the first quarter of 2014.

I hope everyone had a good weekend.  Mine wasn't too bad.  Nothing too exciting happened.  Did my laundry on Saturday and took a nap.  Went to breakfast with my mom Sunday then went grocery shopping.  Took a nap.  Hahaha.  I have such an exciting life!

I had wanted to upload those wild horse photos I mentioned last week, but I was running late for work today and so I'll get them up tomorrow.  :)