Well, not quite.  I brought my camera to work so I could upload the pictures to share... 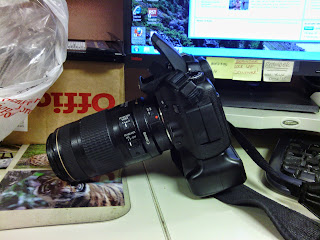 but would you believe I didn't make sure I had the right USB cable to connect it to my computer?  I have several in my desk drawer, but the part that goes into the camera is either too flat or just plain too small.  I'm sorry.  I tried.  I really did.  So tomorrow I'll have them for sure.  In the meantime, I have proof that I have the pictures on the camera...you know, in case you're beginning to doubt their existence...hahaha.  I apologize in advance for their crappiness, but it's the best I could do using my cell phone.  Tomorrow.  For sure I'll have the pictures up to share tomorrow.  I'd better since I'm going hunting again on Thursday...depending on the weather.  If the weather is rainy like they're saying then I may not be able to.  I took the day off, but depending on how heavy it's raining I may do something else.  We'll have to see.  Anyway, on to the crappy photos! 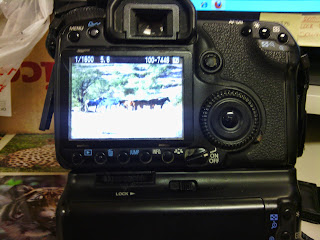 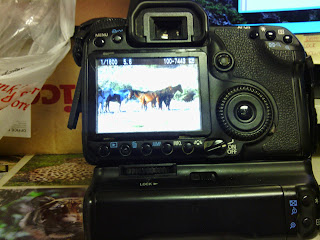 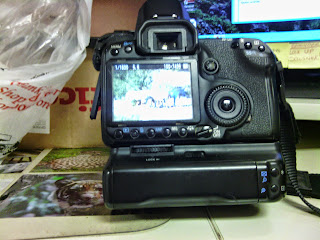 The last photo is a group of 3 or 4 grey horses.  Most of the herd was bay and chestnut but there were a few greys and this was my first time seeing them.  I'll share the whole story about it when I put the real photos up tomorrow.

In case you're curious, the camera is a Canon 40D.  I've had it for....4 years?  When my great uncle died he left me a small inheritance and I used some of that to buy the camera.  Okay, I just looked it up.  I've had it since May 2008 so that's 5, going on 6 years.  It still does quite well, too, except the flash won't stay down anymore.  hahaha.  It's been dropped a couple of times and has had waves of 55 degree salt water splashed on it many times.  I guess you could say it's like a Timex watch...takes a licking but keeps on ticking.  I have no idea how many clicks it has on it and I know digital cameras have a shelf life, so to speak, so I imagine it's only a matter of time before it stops working.  I use my smaller Kodak C182 more often since it's so portable, but for some stuff I use this one.  Especially if I need the reach.  Attached to it is a Canon 70-300mm IS lens and a battery pack.  The battery pack adds weight to it, but makes it more stable as well.