The Fresno Chaffee Zoo in Fresno, CA is having a cool fundraising campaign right now called Change for Cheetahs.  They're trying to raise money to help build a new multi-species exhibit for African animals and an anonymous donor will match up to $1,000 of all change collected during the first week of Zoo Lights.  The new exhibit will be:: (from their Facebook page)

"A series of new African exhibits, many multi-species, that together will emulate the African plains and savannas. African Adventure will be a brand new, state-of-the-art home for a pride of African lions, a family herd of African elephants, white rhinos, a brand new giraffe feeding station with 360 degree views of the savanna, a new dine-in restaurant called Kopje Lodge and, of course, cheetahs complete with a cheetah run!"

Very cool!  Especially about the Cheetahs and Cheetah Run.  I got to see the original Cheetah Run Safari at the San Diego Wild Animal Park a few years ago and it was amazing.

Anyway, fundraising isn't any bit new thing for zoos.  Since most of them are non-profit, they always seem to be having some sort of fundraising going on to help improve the lives of the animals in their care.  What Fresno Chaffee is doing that makes it a bit unique is their method of collecting money... 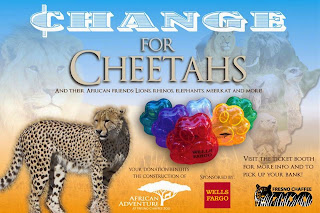 They had these "little" paw print banks made and when you fill it up you take it to the zoo to turn in the money then fill it up some more.  At the end of the campaign, you get to keep the bank.  I wrote on their FB page that I wanted a bank but was outside the area but I'd still be willing to raise money for the new exhibit.  I doubt they'll give me one, but I'd LOVE to have one.  They're so cute and I'm a sucker for Cheetahs!
If I knew someone who lived in that area I'd ask them to get me one, but...I know nobody in Northern California.  Oh well.  Maybe I'll get lucky and they'll be willing to send me one.

Anyway, they're supposed to break ground for the new space next month with a completion date of Summer 2015.  I've been wanting to go back to the Bay Area and now I've got good motivation to save for it.  I don't know that Fresno Chaffee currently has Cheetahs so that would be neat to have another zoo with them.  And I've never been to that zoo or any of the others in Northern California.  My zoo travels have really taken a nose dive.  For awhile there I was visiting a bunch of different ones, but it's been a couple of years since I've been to a new one.  If my friend comes out from Utah next month maybe I can talk her into a drive up to Bearizona...I know she's been wanting to go since I told her about it.  It's been open for about 3 years now and I have yet to visit, but with someone else driving (it's about a 3 to 3 1/2 hour drive) I think I can handle it.  hahaha.