Happy Soggy Friday!  It started raining last night at about 6:30 and has been raining off and on since then.  Let me just say, I'm glad my brother has use of our mom's Jeep Cherokee as an alternative way to work so he doesn't have to ride his motorcycle.

Anyway, on with the show.

Until recently, I'd read people on Blab mentioning seeing sneak previews on Facebook of different Peter Stone models as they're being completed and sometimes have even caught a glimpse of one they've ordered.  I'm on the official web page for Stone and I'd never seen any previews so I was confused as to how they could see them.  Then I found out about a different page where you have to "friend" in order to see the pictures so I sent them a friend request and Viola!  I can now see the previews.  Well, yesterday they posted a bunch of pictures and so I decided to share some of them here...Some are real neat and others have me scratching my head.

The first thing that caught my attention about this photo was the angle of the head and the "in your face" feeling to it.  Almost like someone was trying to take a picture of the ones in the background and this little fellow popped up and said "Hey, look at me!  Ain't I cute?"  The model horse version of a photo bomb.  hahaha 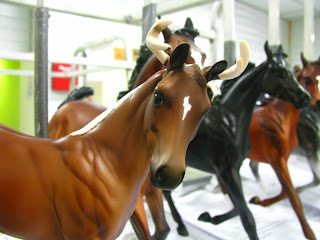 Then someone mentioned the antlers and I was like, oh yeah.  He's got antlers.  I'm not real sure of the purpose of having antlers on a horse, but to each their own.  He's still cute.  Another model had antlers, too... 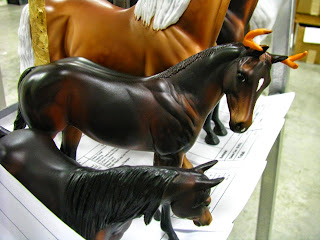 Next we have this line-up of Arabians.  Quite a nice line-up of pretty colors, but that isn't what caught my attention about these lovelies...it's the fact that they alllllll have the same 2013 blaze on their faces.  And I imagine that's why they were lined up together because they'd all gotten their blaze at the same time.  Well, not exact same time, but maybe just one person paints the blazes and so if the models have a similar or identical marking they stay together.  Most of them also have two low socks in front.  Only one has a slightly higher right front and nothing on the front left. 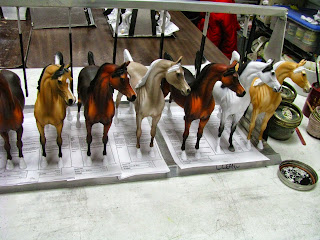 And finally there's the hopefully still un-finished ones... 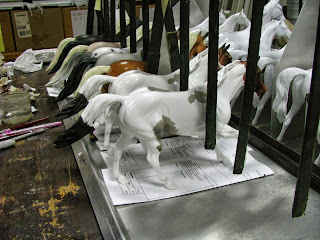 I say 'hopefully still un-finished ones' because of the tails on the two closest to the camera.  I can't imagine having a horse with a tail with such abrupt coloring like that.  Like it was dipped into ink or something.  I'm hoping more color will be added to the top half and blended in with the black bottom half because it looks bizarre the way it is now.  No offense if these are your horses and you're in love with how it looks...it's just not my taste.

I don't think they've even started, yet, on my DAH I ordered last week, but when they do I hope I'm able to catch a glimpse of him here.  He shouldn't be too hard to pick out.  I had ordered the 2012 Equilocity Appaloosa with the 2013 blaze and one medium sock with hoof stripes, but until yesterday I thought I'd ordered him in black.  Well, I called Stone yesterday to make sure they'd gotten my email about wanting the short m/t ISH because I hadn't heard back and while I had her on the phone I wanted to verify they had the correct options and I said black and she said they had me down for Silver Bay.  Huh?  Oh yeah!  I'd forgotten that was what I'd ordered.  hahahaha.  So, if you're "friends" with Peter Stone Horses on FB and you happen to catch one of their preview photos of a Silver Bay 2012 Equilocity Appaloosa with a 2013 blaze and one white sock...that's probably mine!

Well, I guess I'd better get to work.  I have quite a few things to wrap up today since I'm out next week (yippee!).  Have a great Friday!