Hi gang.  I know I've been kind of quiet lately, but I haven't really had much to blog about.  Thanksgiving was nice.  We had a turkey and several sides.  My brother invited a buddy of his over.  Then everyone took naps and I was left to clean it all up.  That didn't make ME very Thankful.  But I was Thankful for another year of relative good health for my mom and brother and myself.

Last week, my brother found out he has Bell's Palsy and was out of work for about a week because he works customer service and talks on the phone, but he couldn't talk very well so he couldn't go to work.  He finally was able to go back yesterday, but when I left the house this morning he still wasn't up so I don't know what's up with that.  He starts a new job in mid-January so I know he's not real eager for his current one, but considering last week he said he'd rather be at work than home with BP, I don't know...Not much is known about Bell's Palsy so we don't know if this was a one-time thing or if it's something he'll have to deal with on into the future.  I hope not.  But if it was just a "simple" inflammation, why give it a scary name that has the word "palsy" in it?  He's super sensitive about it, too.  I've always made strange expressions with my face and now when I do he asks if I'm mocking him.  I don't even realize I'm doing it because I've been doing it for so long.  I just don't know.

On the horse front, last week I decided to order another Peter Stone Design-A-Horse to make up for not being able to get anything at the warehouse sale due to my car deciding to get a flat tire.  I went for the $10 Equilocity pattern from 2012 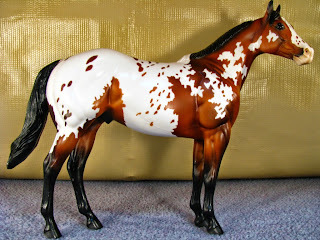 but ordered it in black with the 2013 blaze and one medium sock on the front left leg with hoof stripe.  I never get glossy.  Anyway, so yesterday I get an email from someone at Stone saying I had selected "Custom Body" from the drop-down menu but didn't select a body and if I just reply back to the email or call them with my body choice, she can PayPal me an invoice.  What?  I don't think so.  So I replied back saying I assumed the pattern came on the short mane/tail ISH body and that's what I wanted and was it going to cost me extra because they've already charged my debit card for what I've ordered.  I'm not going to pay another $50+ for a custom body.  So now I'm waiting to see what the answer to that question is.  For shits and grins I went back and ordered the same thing but selected the short m/t ISH and it gave me the same price I already paid so we'll have to see.  If it's going to cost me extra hopefully they'll let me cancel the order.  I want the horse and I could afford a minor charge, but it'd be on principle.  I need to stop impulse buying models.  hahaha.  I was treating myself, though, because I worked OT last week and felt I "deserved" a new pretty.  hahaha.

So, Christmas is next Wednesday.  I have the entire week off.  We already had Tuesday and Wednesday off from work and I won my unit's lottery to get the rest of the week.  I was going to go to Tucson on Sunday, but my credit card decided it was the perfect time to charge me the yearly fee so there went those plans.  I'm going to try to clean up my model horses...literally.  Dust them.  Plus organize them.  Try to get all my Stablemates in one spot, too.  On Thursday or Friday I'll go horse hunting again.  Hopefully I'll have better luck than my last trip.  Not even the domestic horses cooperated for pictures.  Oh well.  That happens now and then.  I did get a Tonto Pass, though, so now I don't have to worry about getting in trouble for not having one when I enter the national forest areas.

Our weather has really warmed up, too.  It was 79 yesterday.  Ugh.  I really dislike Arizona sometimes.  I want snow! 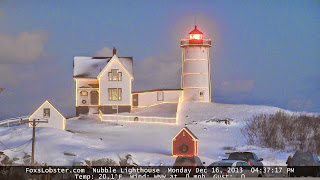 Happy Wednesday!
Posted by Brenda at 7:45 AM