Here we are , a little more than 2 weeks into the new year.  We finally got the chain link fence in the backyard fixed so the dogs can't  get  out and the neighbors aren't  complaining to the city about the assortment of items leaning up against it to cover up holes.  It's  amazing  how  small  of an area a 75 pound dog can squeeze out of.  If both get out, it takes awhile to get them back.  They stay together, but if one starts running so does the other.  They're  incredibly close and can probably be likened to human twins, even though they are only littermates  and not twins.  If only one dog gets out, though, she's  usually easier to get back inside.

On New Year's  Day I headed to a town almost 2 hours to the north.  The Village of Oak Creek and Sedona.  The area is famous for its red rocks and vortexes.  One of the vortexes, near Bell Rock, was supposed to have energy surrounding the entire area rather than just in a certain spot, so I  went  looking  for  that.  There were supposed to be Juniper trees with branches that grow twisted because of the energy.  I chose NYD because it was supposed to snow NYE and the next morning and I  wanted to go see snow. 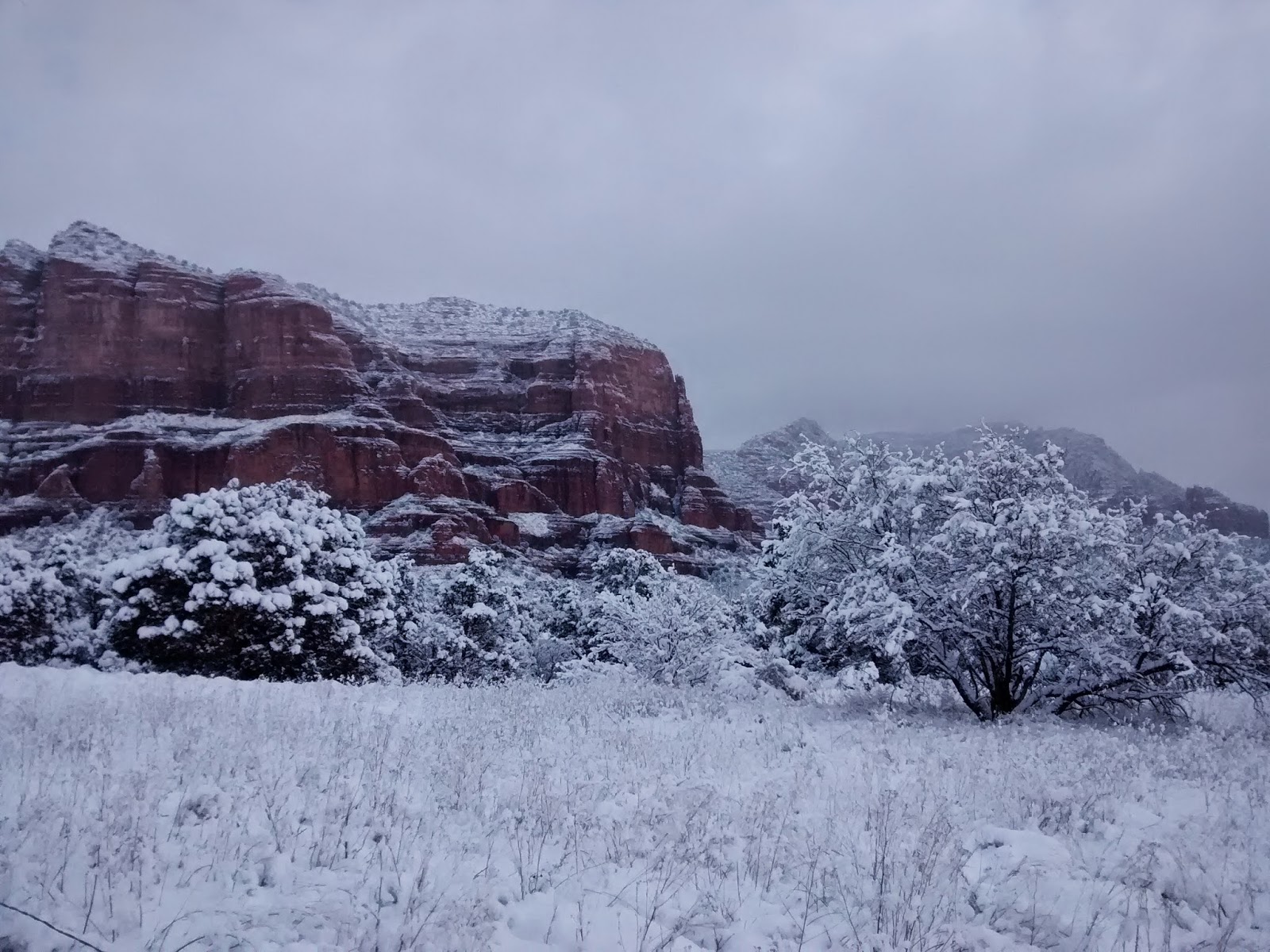 I took the picture with my cell phone so it's  a little darker than it actually was.  It was snowing quite a bit, which I  loved.  It's  wonderful  having  a reliable enough car that I  can  just go to where the snow is.  I didn't  see any twisted Junipers nor feel any energy, but I  don't  know  that  I  was really  expecting to.  Hahaha.  The trip wasn't  without it's  excitement, though.  In the distance I  could see an area where it looked to be snowing heavily and it looked so cool with the red rocks and I  wanted  a  picture  so I  tried  to  find  a spot  to pull over and take a picture.  Some of the merchant parking lots hadn't  been  plowed  yet and I  didn't  want  to  get stuck so I  turned  down a road that seemed mostly  plowed.  And it was.  For the most part.  I was driving along just fine, but then the road started going up an incline and the snow was getting deeper.  And then I  couldn't  go any further.  I couldn't  go forward.  My tires kept spinning.  I tried not to panic and kept trying to go forward in 'drive' and 'low' but nothing seemed to work.  I could, however, go backwards so I  did that.  I drove down backwards  until I  could  get turned around and get going forward.

Work has been going well.  Pretty busy, but then there were a couple of days when there was very little to do and I  left early on one of those days.  Fortunately it was short-lived and things got busy again.

Last week I suffered  a personal tragedy.  I took one of my cats, my red tabby Royal, to the vet.  They were going to run blood tests, take x-rays and schedule him for an ultrasound  because the vet thought he felt a mass in his abdomen that worried him.  They were going to send the blood out for testing but they decided to do a glucose test and his levels were so high their machine wouldn't  even  register it.  My baby had diabetes.  The vet said, though, that was only one of several  problems and while it was treatable, the other things he might have likely  were not going to be, but it was too soon to tell.  He said he would like to treat the diabetes, but... well, I  couldn't  put him through twice daily injections and vet visits every two weeks until they got it under control plus side affects.  As much as it killed me, I  had to do what I  thought was best.  The first few days afterwards  was very difficult and I'm  still working on the guilt, but I  know  it was the right thing.  Especially when I read on a blog that I  follow the problems she has with her dog that has diabetes.  I have a friend whose  dog has it also and it's  amazing  what  they do for their furr-babies.  How much they love them for doing it.  I  don't  know  if Temecula  realizes Royal isn't  coming  back, but he seems to really enjoy the extra attention  he's  getting I will get another cat down the road.  I think  Temecula  would  like  the company while I'm at work.  He and Royal were together almost 10 years so I  think  he'll  enjoy the company.  We will see.  I haven't  touched  my writing notebooks in more than a week.  Just haven't  felt like it.

Tickets for Breyerfest went on sale this past week and I  bought a Child's  3  day.  I won't  be  going  but  it's  nice  having  tje ability to buy left-overs and I  can  sell  the  ticket  itself  as it gets  closer  to  BF when people are looking  for  extras.  I did it last year  and it  worked  out  nicely.  Breyer has also released  the first  models  for Breyerfest and the one I  want  most  is the Early Bird Raffle model, but you have to be present to win.  Bummer.

Today is day 2 of a 3 dy weekend.  I was going  to  go horse hunting but decided to spend it with Temecula.  I spent the morning with my mom then the afternoon  with him, watching movies on SyFy.  I also got some shelves put up and new models finally out of their boxes 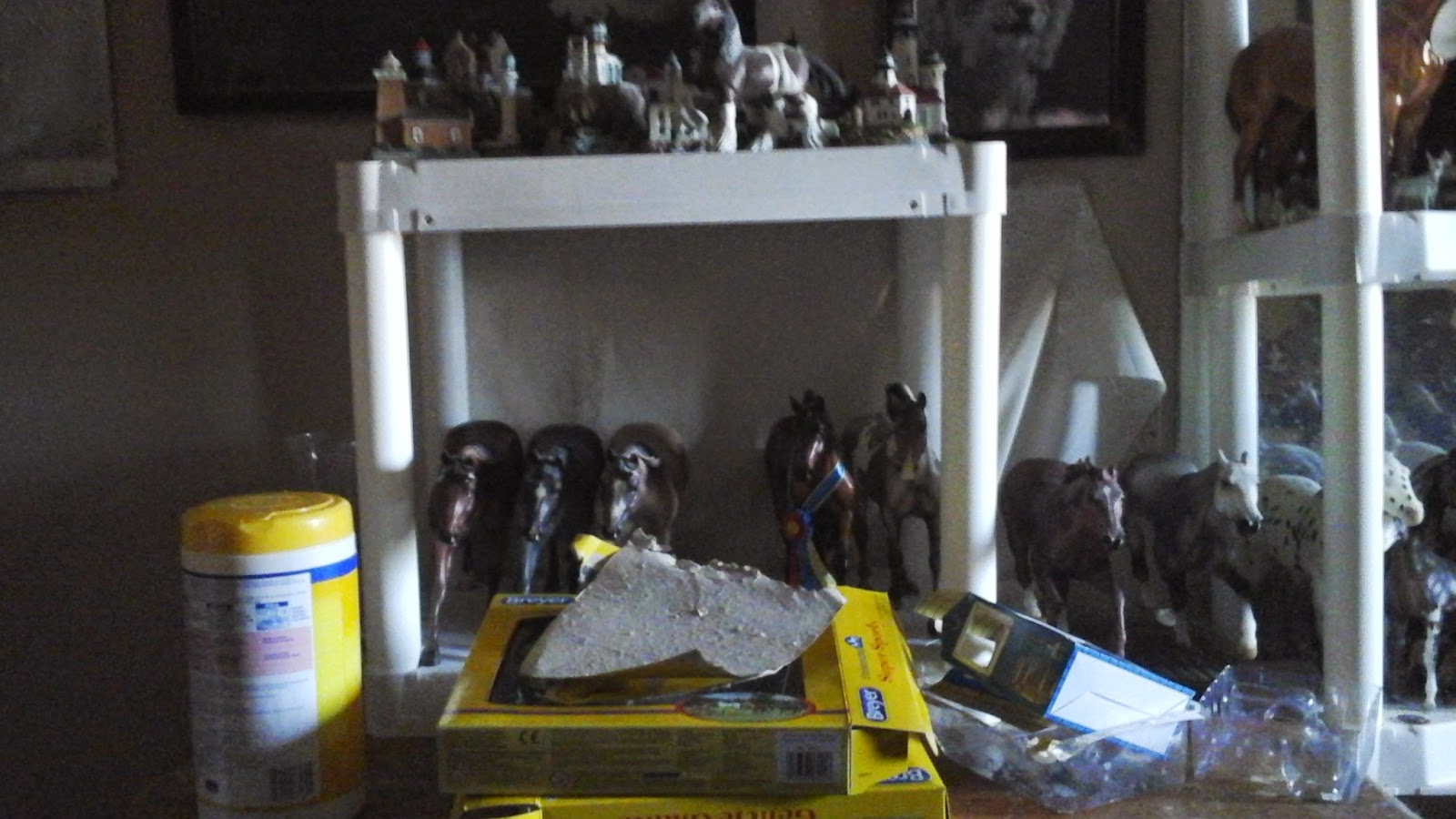 I'm  sorry the pictures  are so dark but I  used my cell phone and it'snot  so good in lolight.