Well, it's that time of year again.  The time of year when thousands of horse-hungry girls (and guys) make the annual pilgrimage to Lexington, Kentucky to blow loads of cash in exchange for small pieces of plastic.  Now, the way I put that would probably make you think I believe it's a waste of time and money.  Well, you'd be wrong.  I would very much like to be one of those people who are there right now instead of stuck at home, forced to live vicariously through the ones that are there and whatever pictures they are able and willing to post.  The last couple of years, there've been several temporary blogs written on Blab by people who are attending.  Those are fun.  And when the smoke clears I will be trolling YouTube for videos of Breyerfest Adventures (the travel part) and Breyerfest Hauls (the buying part).  In the meantime, I get very little work done and my poor tablet is pretty much tethered to the DC adapter so it doesn't run out of juice.

Because of the 3 hour time difference between Kentucky and Arizona, I had very little time to wait before the Quelle Surprise (last year it was Pop the Cork, 2013 was CC Shuffle...every year is different) was revealed and while I don't actively collect this mold, I'm wishing I'd paid for a pick-up.  The mold is Lonesome Glory and, as in years passed, it comes in 4 colors plus glossy and matte. 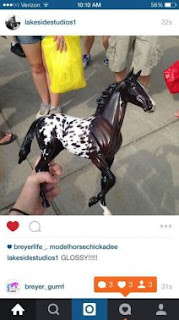 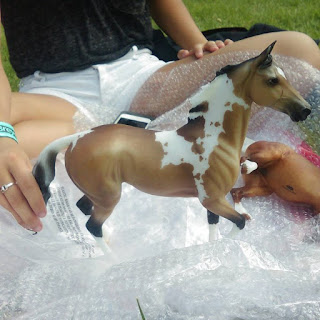 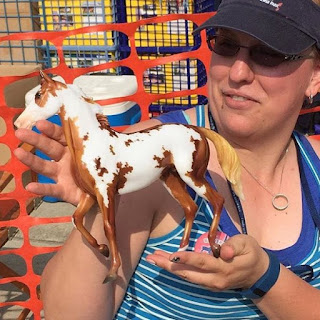 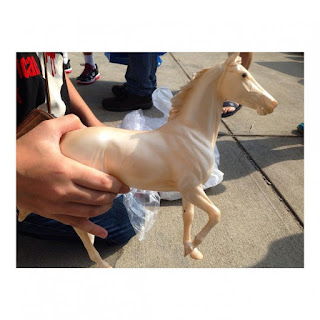 Okay.  The spacing is weird on that one.  It has a white border on top and the bottom and I am at work so I don't have to time to look for another picture so I'll have to live with it, even though it bugs me.  hahaha.  Anyway, my favorites are the top 2.  The 3rd one is ok, but I'm not too crazy about the 4th one.  But if someone were to give me one, I wouldn't turn it down.

Yesterday Breyer posted on their Facebook that they'll be putting lots of goodies in the store (aka NPOD) throughout the weekend and so there'd be no need to line up early, but people still did and apparently it's a good year this year for finding things.  People have found Latigo (premier club release), last year's Bear and Cub.  Last year's Pop the Cork and lots more.  Very interesting.  So I wonder if I go next year they'll have some of this year's Quelle Surprise?  Who knows.  Anyway, people are spending money on the models left and right.  I have someone picking me up the SR Totilas and someone grabbing me one of the Stablemates.  Hopefully her mom will remember to do it since she'll be showing today and today was my SM ticket time.  Should I send her a message and remind her?  I don't know that she'll even be checking Blab today and I don't have her regular email address.  Darn.

Speaking of Totilas...it's been revealed that there'll be another Collector Club Special this year.  We pre-ordered Talullah (or however it's spelled) and got her a few months later, but I think this one is one you order and pay the whole amount then get it a short while later.  But I will definitely be getting him 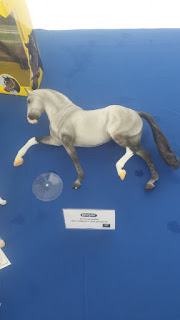 Verrrrrry nice.  I have no idea when he'll be available, but I'm glad he's not a web special where you enter for the chance to win.  If you want this one, you just buy it when it becomes available.  Hopefully soon.  hehehe.  Someone also posted pictures of the mini Hermosa and Corazon.  They're the main reason I even bought into the Premier Club.  hahaha.  I sold the full sized ones to someone else and will likely sell the Bobby Jo that is coming up next month.  But here's the mini ones in all of their awesome glossiness... 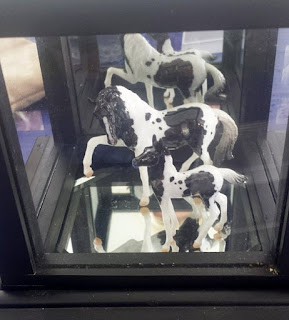 Grrr. Sometimes this computer annoys the heck out of me because it doesn't behave when I'm blogging. Oh well.