I know I  haven't  posted in awhile, but there hasn't  been  anything worth writing about.  Yesterday I  had written up a big huge post about my previous life as a Sea World "Insider" (aka a regular who gets special perks) but ended up deleting it because I  figured nobody wanted to read about it.  I certainly didn't  want to and I  lived it.  I wouldn't  say it was a time in my life I want to forget because I  enjoyed that part and the friends I  made as a result, but it's  in the past.  Whatever.

I'm  still  going out looking for the wild horses as often as I  can and I've  seen some new bands I'd  never seen before plus some in Gila River, but it's  been awhile since I've  seen my favorite little mare Scarlett. 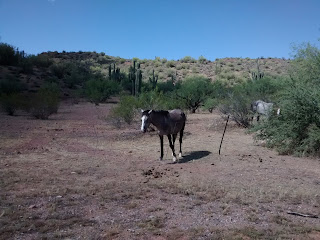 Her band stallion Marty, who you can see in the background, isn't  as curious as she is and I  fear he got fed up with the people who kept "chasing" them with cameras that he's  permanently  moved his small groip somewhrre else.  You may laugh and think "Isn't Brenda one of those people chasing them with a camera?"  And to a small degree you would be correct.  However, I  don't  physically chase after them when they move away and I  have seen people do it.  I took the above picture with my cell phone and is the original image, no zoom or anything.  When she saw me she came over to the fence, as you can see, while Marty and Orion "hid".  I have no doubt that the next time I see her she will have a foal at her side.  I just hope I  see her soon.  Right now it's  kind of hot to be out looking for them anyway so I  probably won't  go looking again until September or October.  Even though my car has a/c, it can still get a little toasty driving around when the outside temperature is 110 degrees.  And sometimes I  do get out of my car to get better pictures.

I am in the Breyer Collector's  Club and back in February we were given the opportunity  to  pre-order the annual model.  I liked the mold and the color so I  paid my $20 deposit.  In May or June I paid the balance and yesterday she arrived.  Her name is Tallulah, which I  don't  care for, but that's  besides the point.  Several people on MHB have reported tons of flaws, but I  got lucky with mine.  She has some minor flaws but overall I'm  quite pleased. 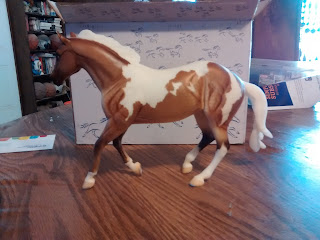 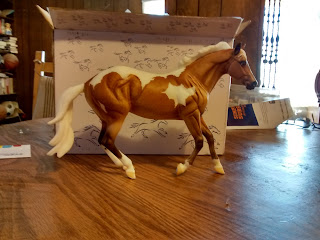 This is a new-ish mold.  The "founding" model was one offered in the Premier Club a year or so ago named Latigo and is the only non-custom I don't have, but the prices on him are still kind of high right now.  There has only been one released to the retail public and that was Harley D Zip.  Breyerfest 2014 saw the mold being used as a special run, both as a grey pinto and a solid silver decorator.  I  have the grey pinto.  The mold was also used in the BF auction in 2014 as a soft red dun and will again be available as an auction piece this year in a sooty buckskin pinto.  I  wish that one was a BF Special Run because I  really like it.

Speaking of Breyerfest, it is next week.  I'm  not  going...again.  Maybe next year.  I have someone picking me up a model on the Totilas mold and *hopefully* one of the 4 stablemates.  It's  been nuts.  I have had 4 different people I've  asked to do a stablemate pick-up for me.  The girl picking up my Totilas would do it but her pick-up fee is as much as the single day ticket to get the stablemate.  No thank you.    Who knew it would be so much drama getting one little plastic horse.  I tell you what, I  don't  plan on doing pick-ups again.  Oh well.

Take care, Everyone!
Posted by Brenda at 7:01 PM