When things fall down and go "boom"

A couple of months ago, after a slight freak-out, I discovered my doors won't lock if they aren't shut completely so when I got home yesterday from work and hit the 'door lock' button and nothing happened, I knew likely the seatbelt was obstructing the door dealie, keeoing it from closing completely. So I opened the door, but caused it to hit my left hand and making me drop what I was holding. The 2 Steno pads were no big deal, but I was also holding my tablet. I don't carry a purse and after the dogs got ahold of my "work bag" and scattered everything all over the place, I leave my bag in my car so that is why I was carrying stuff I wanted to have with me last night. Anyway, I picked up my stuff after fixing the seatbelt and door then went inside. I did a few things then sat down at the table and was about to check some of my favorite websites when I noticed a crack in the upper right corner of the screen (note:the line that says "where relationships matter" is from my car loan bank, not a dating website lol) 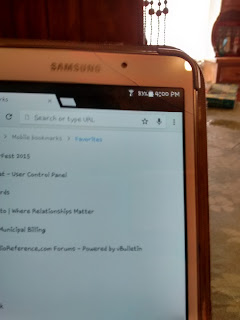 The crack doesn't affect its operation and it can't get longer, but it probably can get deeper and break off entirely.

Well, today I was at work and was sitting at my desk at lunchtime when I noticed a small scratch on the edge of the tablet in the silver part. It was small. Barely noticeable. But then I saw a longer scratch a bit further down. Definitely more noticeable but really, it's just cosmetic 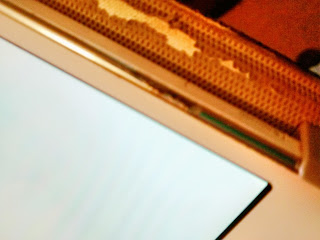 I'm more worried about the crack than the scratches and most of my electronic devices have scratches of some sort. Heck, my Canon 40d camera had permanent salt water residue thanks to being repeatedly doused, courtesy of a 10,000lb orca named Ulyses. Ah. Those were the days.

I meant to share these next couple of pictures awhile ago, but I never did. I took them because they amused me. I have never seen so many horse trailers at one time at this trailhead. They probably parked here because Coon Bluff was already full of trailers. 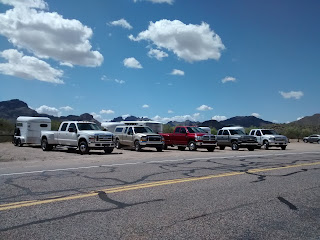 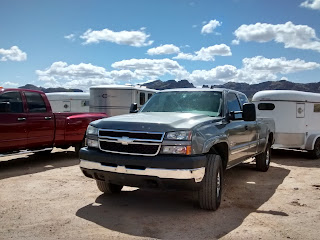 It's our monsoon season now so we're dealing with triple degree temperatures and high humidity. Just about every day there's a buildup of stormy looking clouds and sometimes it looks like we might get a dust storm, but nothing happens. Last week Tuesday our a/c went out. We replaced the batteries and I ran out and got some filters, but nothing worked so we had to call for repairs. They finally showed up around 8:30pm or so. They allegedly fixed it and all was good. Until Thursday. I came home and, much like Tuesday, the house was very warm. My mom said the thermostat read 87. I sent a text to my brother, who called the repair guys again. Apparently there was a leak and all the freon they'd put in Tuesday had drained out. The house temperature reached 91 degrees before it finally started cooling down. Eek! That's just too warm. But here it is, exactly one week later and our a/c is running fine. Yay!

Work has been crazy the past several weeks. We had one person retire and another move to Seattle and we've had to move people around and absorb work. Not fun. At all. My supervisor didn't seem to realize the reason we were falling behind was because we had too much work and not enough qualified people to do the work. Well, apparently he was told he couldn't hire anyone but he decided not to let us know that. He moved people around again and we now have another processor, but she isn't fully trained because she'd been moved to a different position in our unit before she'd been fully trained. She should be able to help us get a little caught up. I worked overtime last Saturday. Not fun.

Well, I guess that is it for now. I hope everyone is doing well.
Posted by Brenda at 5:44 PM