Some of you mat have read my post  few weeks ago about my incident with my tablet when my car door hit my hand and caused me to drop my tablet.
http://bcdesertlife.blogspot.com/2015/07/when-things-fall-down-and-go-boom.html

My tablet ended up with a crack along one corner that I knew would eventually cause problems with the usability of the tablet.  I didn't know when it would happen or what the issue would be, but I recently found out.  The touch screen recently stopped being as sensitive.  I would enter one letter but it would put in something else.  Initially I thought it was just me typing to fast or something, but the mistakes were appearing a lot more often and I knew it had to be because of the screen.  Another indicator was when I was trying to play a game.  I would touch one item to pick up but something else was picked up instead.  The final straw, the event that led me to venture to Barnes & Noble in this 500 degree heat, was when the screen image started jumping all over thelace, opening new windows without my wanting it to and images jumping all over.  When the screen first cracked I went ahead and did some research into what my next tablet would be.  I like Samsung and B&N  had them for  a good price so I decided to get another one, but the 10". 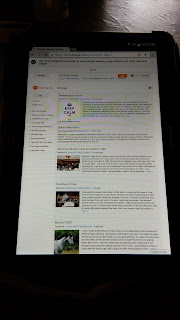 It is significantly larger than the 7" I was using.  It's a little difficult to do any speed typing because of it's size, but I can turn it vertical (the default design in horizontal) and that makes it easier.

Today the Arizona Humane Society is having a fund-raising telethon and so far they have raised more than $130,000!!!  It's quite cool.  Someone is matching the donations, which is awesome.  We have a dog, Bear, who came from the Humane Society (Dyna&Harley came from a rescue) and my kitty Abbie did, too (Temecula&Royal came from a no-kill shelter).  Bear came from the shelter itself while Abbie was adopted through a "satellite" facility.  About 10 years ago we had another dog from the Humane Society as well and a former roommate adopted from Rabies Animal Control.  TW  was a throw-away I found at a grocery store one night and CC was a feral cat.  Sadie, my dad's dog, was pretty much abandoned by her owner and was lower to run back and forth across a fairly busy highway in Star Valley.  So I guess you can say my family has a thing for unwanted animals.  I should donate something.

We've had some pretty good storms come through here this past week.  Dust.  Thunder and lightning.  Rain.  We managed to escape losing power, which is good.  Tomorrow it's supposed to be 110 degrees.  Ugh.  When will it finally cool down?
Posted by Brenda at 1:23 PM