Hurray!  After weeks of waiting after getting verification that the club was going to happen in 2016, it has FINALLY opened for membership.  All we were told was that it would be late October and it can't get much later than it is now except Saturday, which is the 31st.  We were figuring that's when the announcement would happen or at least tomorrow, Friday since they like to do things on Friday (payday perhaps?) but I went to the Blab forum and saw that the thread about the Stablemate club was at the top.  It's been active lately and figured that people were just "complaining" that it wasn't active yet, but then I saw the first message on the last page said it was open and the person had already bought into it.  I didn't even bother reading any other answers before "running" over to the Breyer web page and seeing it for myself. 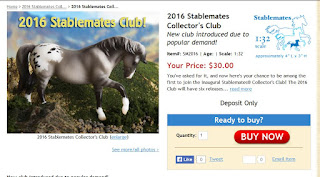 Needless to say, I joined immediately.  It's funny, though.  A couple of years ago, prior to Breyerfest 2013, Stablemates really weren't on my "radar".  Sure, I had some, but I wasn't an active collector.  That changed, though, with the release of new molds, specifically Chrome and Dungaree.  After that I bought more and more.  I don't know how many I have and I only collect certain molds, but that's okay.  This is a brandnew club.  A club that apparently in the past Breyer said wouldn't be feasible.  I don't know what has changed, but I'm glad it did.  I'm excited about this club.

Anyway, I just wanted to share.  It's Thursday.  I have a headache.  It's payday but I have rent, car payment and car registration due so I have "no money".  hahaha.