So, sign ups have begun for the Secret Santa on Blab.  Last year I missed sign ups by a day or two and have been looking forward to it all year, but now that it's getting started, I don't know if I want to join.  I haven't been spending as much time on Blab lately and if I joined SS I would have to visit regularly in case someone posted a message to ask me questions.  Plus, I would have to post questions to ask what my partner might be interested in getting.  That part isn't exactly a requirement but it helps in finding out what your recipient might like and since I'm a huge fan of buying stuff my recipient really wants I'd want to make sure to find that sort of thing out.  I have a few days to decide what I'm going to do, but right now I'm thinking I'm not going to do it.  It would, though, be nice to get a Christmas present.  I don't get any anymore except what I buy myself and so it would be fun.  And it would be nice to buy stuff for someone and knowing exactly what that person wants.  We'll see.

The new Premiere Club model has been released.  I'm not in the PC but I really want this guy... 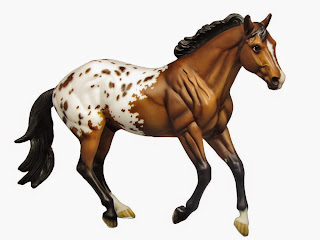 It's a new mold and they already have plans on a regular run color for him, too, but I also want this one.  Problem is, I'm not in the Premiere Club.  It looks like there's a very noticeable line of overspray along his crest, but I can overlook that for this one.  I already posted on Blab that I'd be willing to buy him if someone wants to stay in the club but doesn't want this model but I don't have much hope in getting one.  Not right away anyway.  I got the Kalahkaari after market and for a somewhat reasonable price but I'd prefer to get him at cost.

Today is laundry day.  Oh joy.  I also need to mail out my spooky swap.  I can't believe I ended up waiting until the deadline to mail it out.  There's that procrastination hard at work again.  Hahaha
Posted by Brenda at 6:52 AM