Normally I finish a blog post talking about the weather, but today I'm going to start with the weather.  I woke up this morning and went in search of the current temperature.  Three news channels said it was 56 degrees so on my way out the door, after checking one last news channel (it had been on commercial break), I put on my jacket and walked outside to...warm.  Not warm warm, but certainly not 56 degrees cold.  I was disappointed to say the least.  I'm anxious for the cold weather to start and the freezing cold air conditioning in my office doesn't count.  My biggest gripe about living in the desert...possibly my only gripe...is the weather.  No, I take that back.  It isn't the only gripe.  The other one is that it's not near the ocean or a large body of water and so there's no lighthouses.

Ooooo.  What a wonderful segue into my next subject.  No, folks, that wasn't planned.  hahaha.  There are lots of interesting and unique lighthouses out there, but probably none more so than Sullivan's Island in South Carolina.  Activated in 1962, it was one of the last major lighthouse built by the government and has quite an interesting shape. 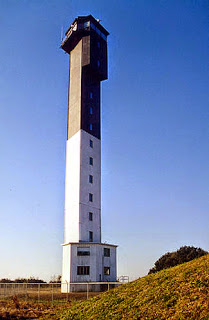 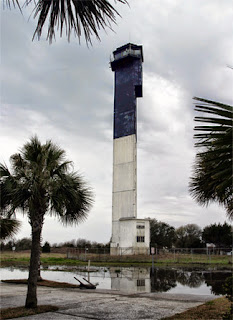 It resembles an air traffic control tower more than a lighthouse, but it's triangular shape serves a very important purpose.  With its point facing the ocean, this lighthouse can withstand winds of up to 125 miles per hour and has, fortunately, been able to withstand every storm that has been thrown at it.  It's the only "square" lighthouse in the United States, but it's also the only one with an elevator.  I'd love to visit it one day.  Harbour Lights made a sculpture out of it, but it's hard to come by and when it came out I wasn't collecting them and since Harbour Lights is no longer in business, they're even harder to get.

I'm having problems.  I really want to go to northern California this summer and do a lighthouse tour, but I keep thinking about San Diego and how it's been more than a year...almost 2 years...since I've been there and I'm really missing it.  I haven't made any firm plans for anything so right now it's just all in my head, which is bad enough.  hahaha.

Yay!  I'm going to talk about horses!  My main favorite colors are paint, appaloosa and bay, but I'm very particular about the kind of bay I like.  I don't dislike the other colors, but hey, it's good to have preferences, right?  It's part of what's so great being an American...the right to choose.  Anyway, recently someone posted a picture on Facebook of a gorgeous horse that I just went nuts over
I'm not totally crazy about the bald face, but I love the soft grey and the two-toned mane.  I think she (he?) is just beautiful and would love to have a horse that color.  It kind of reminds me of a Weimaraner dog, the coat color.  **ETA** Thanks to one of my followers, Alyssa M,  I now know the beauty above is Reining In Diamonds aka Cricket of Shining C Grulla Horses.  A beautiful mare who is currently in foal to Black Tie Gunner.  But it sent me in search of other Grulla colored horses and while I couldn't find any that looked quite that nice, I did find some other cool-looking ones...or at least ones their owners are calling Grulla... 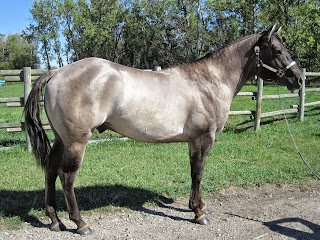 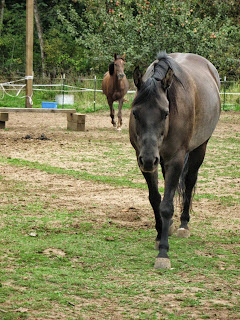 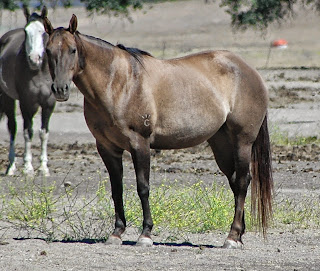 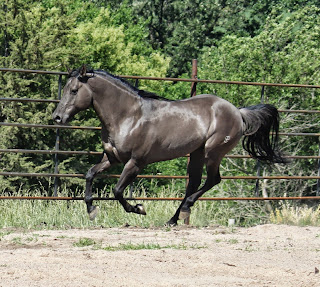 The second horse doesn't appear to have a dorsal stripe and the other three aren't real apparent.  And I don't know, but I think I'd call #4 a liver chestnut or seal bay more than a Grullo, but I'm not expert.  I'm not real familiar with color genetics in animals, more people and I'm hardly an expert with that.  But #4 looks like it has a faint dorsal strip so it could be a Grulla but I'm still leaning towards seal bay.