Okay, so I guess I lied when I said my next post was going to be about lighthouses again, but new stuff about horses always trumps everything else.  hahahaha

Now, I'm not real sure about the details on this guy, but I know that I must have him... 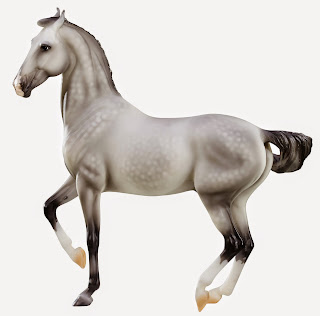 He's the 2014 Collector's Club exclusive, but I don't know exactly what that means.  Will he only be up for grabs through a drawing?  Or will he be available to anyone in the club who wants him?  I definitely hope it's the latter since I conga this mold.  Okay, my conga only contains two models on the mold, but that's neither here nor there.  The dapples look nicely done and I love the little snip on his nose.  At least...I *think* it's a male.  I *think* there's something there that's supposed to be there, but it's kind of difficult to say for 100% certainty.

Well, that's it for today.  It's Friday.  Yay!  No plans for the weekend other than grocery shopping on Sunday.  The temperature has warmed up to the 90s again.  Ugh!

I hope everyone has a good weekend.