Weekend tragedy of the plastic kind...

I don't like doing laundry.  I never have and I doubt I ever will.  I don't do anyone else's laundry except my own and I do it as little as possible.  I have enough clothes to go 3 weeks without doing any, but my mom and I have a pretty good system where we alternate Saturdays.  My brother usually does his on Sundays.  Anyway, this past Saturday was my turn, as I likely mentioned last week.  I did my first load and when I finished hanging stuff up in my closet I left the door open because I knew I'd need to get into it again in about 45 minutes and my door isn't the easiest to manipulate.  Well, that turned out to be a mistake.  Big.  Huge.

When I brought my clothes basket it with the second load, I bumped into the closet door and it went crashing down  (sorry for the horribly dark picture) 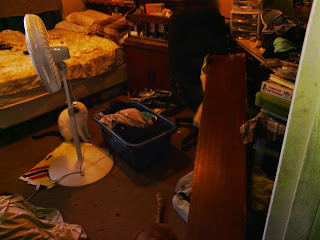 If you look, you'll see two cats...or, one cat and part of a cat.  The closet door landed on my desk chair and often there's a cat on that chair.  I was very fortunately that there wasn't.  That would have been devastating.  But they were okay.  But that wasn't it.  After bumping into the closet door I also bumped into my dresser.  Water from the cats' water glass sloshed onto the dresser (the mug is on top of the dresser) and the dresser bumped into one of my two horse shelf units and down they came... 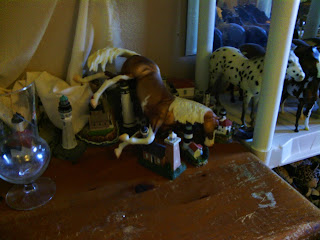 Big Chex To Cash fell about two feet onto several of my lighthouse sculptures and my hurricane glass from Rainforest Cafe in Las Vegas.  I heard something break.  It was glass-sounding so I knew it was the hurricane glass but I knew there would be damage to Chex because a couple of the sculptures he landed on had pointy tops.  I was afraid to look.  So I didn't.  Not right away anyway.  Initially I thought the only casualties were Chex and my top row of horses, which include Topsails Rien Maker, Bet Yer Blue Boons, Constellation, Lil Ricky Rocker and Zips Chocolate Chip 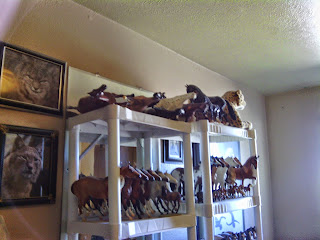 I left them where they were and put up my clothes, but then I saw the shelf from a different angle and saw I'd had a double-domino 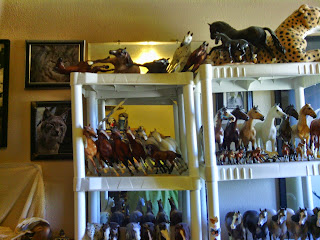 This one hurt the most.  That is the majority of my Lady Phase conga.  Seeing them slumped over made me feel ill.  Literally.  I got a headache and my tummy started to hurt.  It would be 7 hours before I could bring myself to investigate the damages.  Fortunately, Chex only received some scratches and paint scuffs from the lighthouse sculptures.  One of my LP models got a scratch that was about an inch long.  Not a deep scratch where you could really even feel it, but it's there.  I think because they were packed in so tight and had the "poles" on the sides, that's what kept them from falling over entirely.  A few of my Stablemates fell over on the other shelf, but none of the bigger ones did, which I'm grateful for since my Stone ISH conga is there along with my Ravel and Kalahkaari "congas".  I don't like them more than the Lady Phases, but they're more money.  Boy am I glad I don't collect china or resin.  hahaha.

There was more I wanted to write about, but I can't remember now and I need to get to work.  It's Monday and I have plenty to do so I should probably do it.  I hope everyone has a great day!