I've been wanting to share these pictures since last week, but haven't really gotten around to it.  I found them on the Pinterest board for Breyer horses.  I don't use Pinterest, but I had gotten an email about something and it showed some tiny thumbnails related to stuff on Pinterest that looked interesting so I checked it out.  Anyway, the "pins" said something about these rooms being perfect for a horse crazy little girl, but how about a horse crazy big girl?  I mean, who wouldn't want any of these rooms? 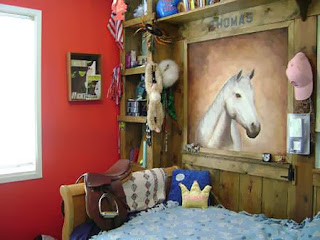 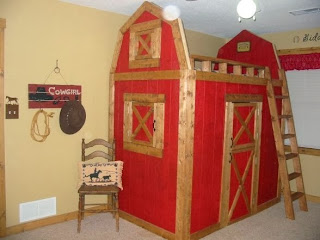 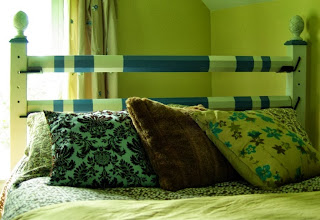 The barn room is a little more Western-y for my tastes, but I've always wanted this type of bed...where the bed is elevated and there's a desk or something beneath you.  Even as an adult I wouldn't mind an adult-sized version.  My favorite is probably the first one, although I'd probably have to figure some way to permanent attach the saddle to the footboard or I would likely be picking it up off the floor ever morning because I kicked it off.  Similarly with the jump headboard in the last picture.  I hope the rails are secured in the cups so they can't be knocked off.  I don't think your housemates would appreciate being awoken in the middle of the night by that loud "bonging" noise a rail makes when it hits the ground.  hahahaha.  The top picture sort of reminds me of a door cover I used to have that my dad gave me for Christmas one year.  It was a horse behind a stall door with its head sticking out and covered the entire door.  Man, I loved that thing!  When we moved to another house I asked if I could take it with me and luckily our new landlord didn't mind.  Unfortunately, when we moved out of that house I was moving into my great-aunt's house and then into an apartment so I could no longer keep it.  I was bummed.

Last week I mentioned about the closing of the Southern Nevada Zoological Park/Las Vegas Zoo and said an alligator went to the Phoenix Herpetelogical Society and I believe I mentioned an Otter had gone to Bearizona, but didn't know what the Phoenix Zoo took in.  I found out a few days ago they received 6 animals.  2 Patagonian Cavies (a very large south american rodent) 2 other rodent-type animals and 2 Chinese Alligators. 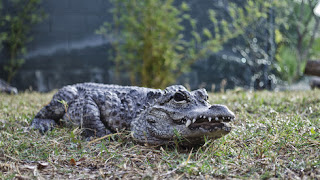 The Alligators were on loan to the LV Zoo from two other facilities so The Phoenix Zoo sent one of the Alligators back to where he'd come from and worked out a loan agreement with the other facility to keep the 2nd Alligator.  I imagine he'll be placed in the former home of the Komodo Dragons until the new babies are big enough to move there.

My weekend went too fast.  The weather was very nice.  On Saturday I did laundry and on Sunday my mom and I did our weekly grocery shopping.  Then my mom and brother went to a semi-family thing across town.  I call it "semi-family" because there were people we were related to (aunt and cousin and her two kids) but mostly people we weren't related to except sort of by marriage, I guess (aunt's husband and his mom/brother/sister/etc).  I didn't want to go so I stayed home and had the house to myself for several wonderful hours.  I don't often get the house to myself on a weekend day.  My mom also went to breakfast at IHOP yesterday before shopping.  It was pretty good, but I'm looking forward to our Denny's to re-opening.

Now, to close this off, I want to vent.  Last week I had to re-up my Straight Talk and was unable to.  I tried on the website and I tried calling Customer Service, but they told me my bank wouldn't allow the charge, which was a bunch of BS.  So I hung up on them and ordered a Republic Wireless phone.  My brother has had it for several months and has tried to get me to switch to it, too, but I was reluctant.  Now we get to the gripe.  I ordered it on Friday and got a notice that it shipped on Friday and would have a delivery date of Wednesday.  Well, by Saturday it was in Phoenix and now, apparently, it's going to sit for the next 3 days until it's delivered on Wednesday.  Tell me, what is the purpose of that?  It's in Phoenix.  Send it on to Tempe and let it be delivered to me.  I keep checking the tracking number in hopes that they deliver it today, but so far...:(  Grumble grumble.  I try not to be too tied into my electronic devices, but I don't like not having a phone.  <sigh>  Sometimes technology really bites!

I hope everyone has a good day.