I've never been a huge fan of apples.  They're a pain to eat whole and those Apple slicer doohickeys never work properly for me.  I've seen the packages of already-sliced apples, but the price is a bit ridiculous to bother with them.  I could slice them at home with a good knife then sprinkle lemon juice on them, but I don't like the way it makes them taste.  Yes.  I can be hard to please sometimes.  I admit it.

So, a couple of weeks ago my mom and I walked into Albertsons to do our weekly shopping and I noticed a floor stand containing Honeycrisp Apples.  I decided to buy a couple to see how they taste.  I'd heard of them before but since I didn't like apples I never bought any. 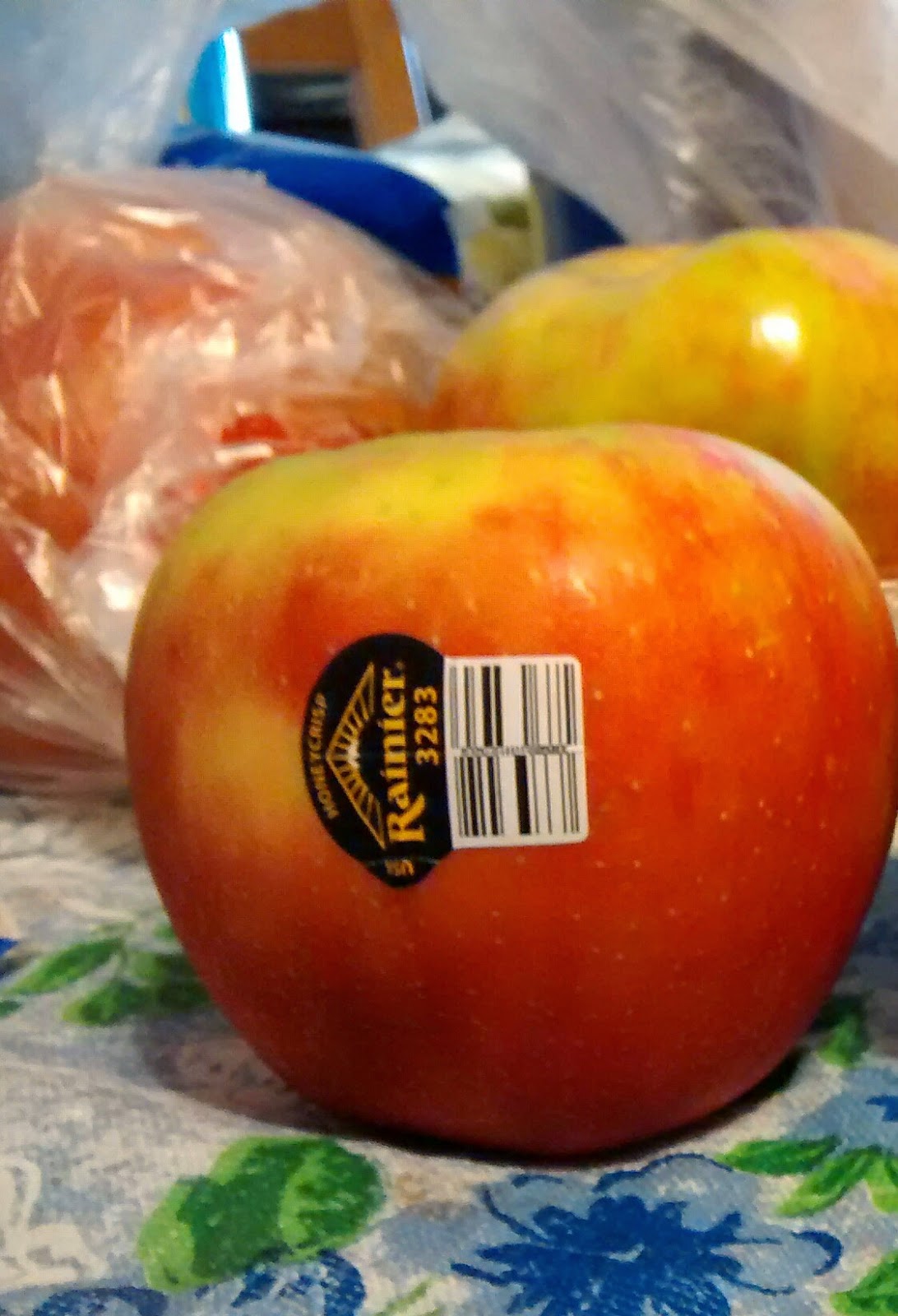 When we got home I went ahead and had a try and there was an explosion of flavor in my mouth.  At first I wasn't sure I liked it because it seemed awfully tart, but the more bites I took, the better I liked it.  Still, at $3.99/lb it wasn't something to be bought very often.  Last week we went to Albertsons again and I bought some more.  Then, I learned we had entered Honeycrisp Season.  Frys had them on sale for less than $2.00/lb so when we went there today to do our shopping I planned to buy more. But wait.  These ones were HUGE...quite a bit bigger than the ones from Albertsons. Was that because it was now harvest time for them?  I don't know, but when I got home I just couldn't get over how big they were so I decided to do a size comparison and...WOW 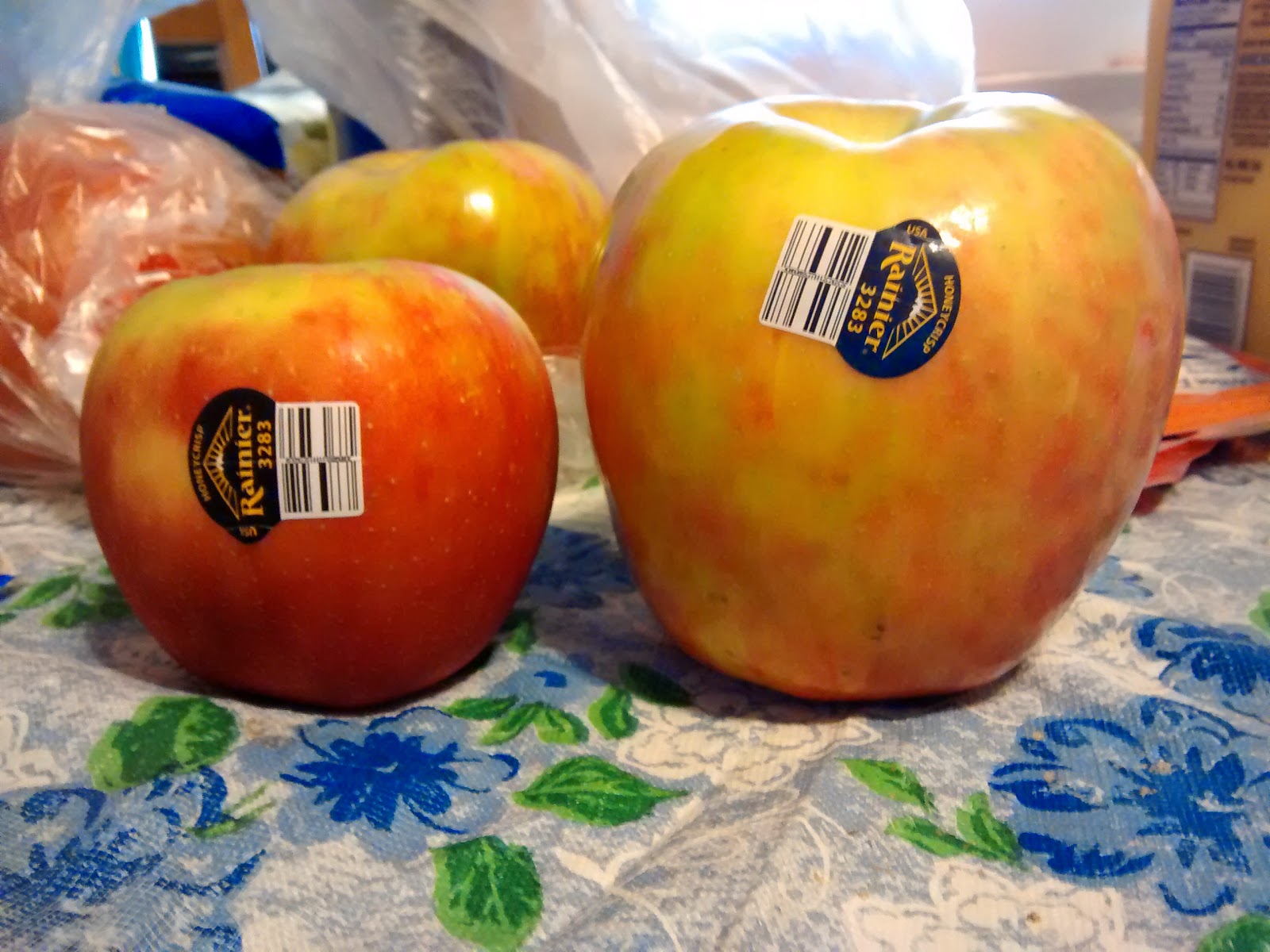 They're almost twice the size. So I got a little curious about the history of this apple and looked it up on Google. Apparently, they're self-sterile, meaning they need another Apple tree to pollinate them. They were created at the University of Minnesota, Twin Cities in 1960 but didn't really gain in popularity until more recent years. They're hybrids, not something Monsanto came up with. In 2006 they were officially named the State Fruit of Minnesota. Another thing that's really interesting is that the younger the tree, the bigger the fruit is and as the Honeycrisp tree matures, the apples become smaller. Chile and New Zealand have been able to successfully grow the trees so soon it is hoped that Honeycrisp will be available year-round. That's apparently why they're expensive. Their harvest time is so brief and it takes 5 to 6 years for the trees to grow enough to harvest and due to their popularity explosion, there's a bigger demand than there is supply. Once more places are able to grow the trees, however, the prices will come down. hopefully.

I hope everyone has had a good weekend. Mine has been uneventful. Laundry yesterday and shopping today. My mom and I need to win a big jackpot with the lottery so we can hire someone to cook, clean and do laundry for us. Hahaha. $7 wins just aren't going to do it, though. It's kind of funny how I don't like to do all the cooking since there was a time I'd wanted to attend Culinary School. My grandfather was paying for our educations but he had two rules: you had to go to a 2 year junior college first and then a four year in-state university. My dad (it was his dad that was paying for our college) wouldn't let me even ask him if he'd for it and I couldn't afford it on my own. A year or so ago my dad's sister and her husband were in town for a couple of days and I mentioned to her about cooking school and how dad wouldn't let me even ask my grandfather to pay for it since it didn't follow "Bubba's" (what we had to call our grandfather) rules and my aunt said Bubba probably would've paid for it if I had asked. Too late now. And when your dad is telling you that you can't ask Bubba to pay for it, you're kind of stuck between a rock and a hard place. What does all that have to do with anything? Nothing really except somehow I've ended up being the main dinner-maker person around here and I don't like having to cook all the time even though I'd wanted to go to cooking school. Hahaha

Okay. Well. That's it then, I guess. So, in closing, if you like apples and have never tried Honeycrisp (or HoneyCrunch from New Zealand), you should try one. You might like it.
Posted by Brenda at 12:45 PM