Okay. So. The World Equestrian Games started a couple of weeks ago in Normandy, France. Unfortunately, the only way to watch it is to actually be there or to pay a fee and watch it stream live on the FEI website. Pass. I never knew there were so many horse-related...sports. And I use that term lightly. Driven Dressage anyone? Give me Show Jumping, Dressage and Three Day eventing any day. Vaulting is...I don't know. I don't get it. Yes, many horse sports have some degree of danger for the horse. The vaulters, too, but they put themselves in danger. It's their choice, but horses don't have that choice. Most sports, though, don't have people jumping all over the horse, landing on their backs after jumping in the air or have multiple people on them at the same time 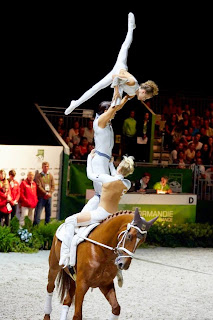 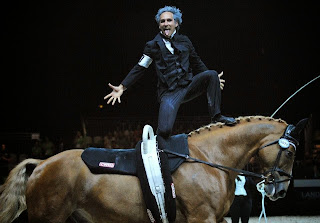 Humph! What can I say? I just don't get it. I'd much rather watch this 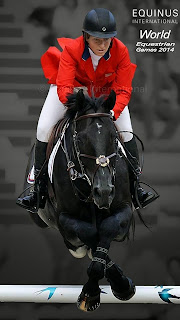 Than a bunch of people in tights jumping around on top of horses. But that's just me.

So yesterday I visited the Stone Horses website for the first time in awhile and saw they have a plethora of pretty plastic ponies. Most of which I can't afford. They have several Marwari for sale, but this one I liked the most. Probably because he resembles Kalahkaari, even though I have that model and don't need two of the same color, even though they're not identical... 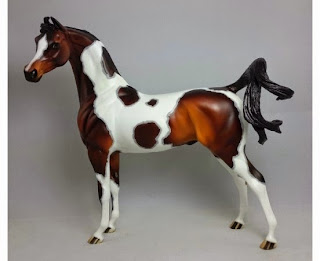 Not surprisingly, with the exception of the Marwari, all of the models I like are Ideal Stock Horses 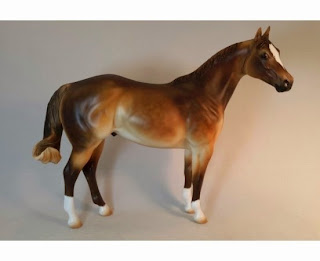 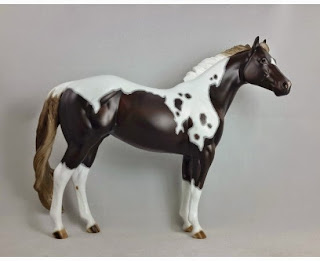 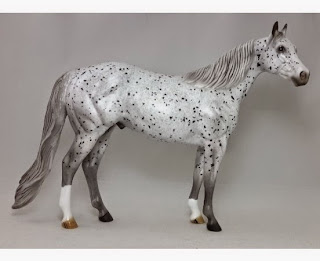 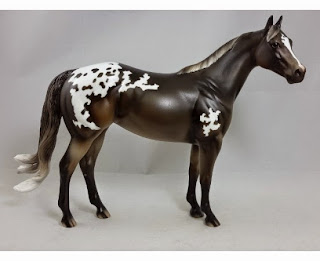 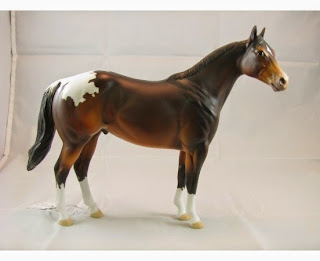 And then there's Flannel PJs, whom I've always coveted and am surprised to see still available 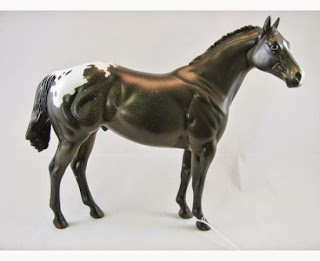 His price has come down a 'few' dollars since the last time I saw him available, but he's still outside of my budget a bit. At least, though, he costs less than the first few. Dodge Ball, the Marwari, is $550 and Rum Runner, the first pictured ISH, is $500. The others range in price from $350 for Tardy Miss Smarty (brown paint) down to $80 for Mocha Marshmello Swirl for the last Appaloosa pictured, who is part of the 2014 line-up. If I could pick any one of them to make mine without concern for cost, I think it would be...I'd probably have to flip a coin to choose between Flannel pjS and Sideshow, which is the silver bay Appaloosa.

Today is Saturday...nothing much exciting going on today. Doing the dreaded laundry. In a bit I have to go get lottery tickets for tonight's drawing and some gas for my car. Yippee skippy. We had to turn the air conditioning on early today because it was already 85 in the house. My mom said it was a shame since the high was only supposed to be 101 today. I told her that the outside temperature didn't matter if the inside temperature was hot. We might get a storm tomorrow or Monday, but who knows? Still waiting for more definitive signs of Fall. The morning temps have been cooler, but the air doesn't smell like Fall yet. Don't ask me what Fall smells like because I can't describe it, but I definitely know it when it happens. Hahaha

I hope you all have a good weekend.
Posted by Brenda at 9:04 AM