After worrying the past few days that I hadn't renewed my Collector Club membership in time to get this year's JAH (they had arrived in California and a collector in Arizona got hers this past Saturday), mine arrived today.  Yay!

The cover is an awesome compilation of talented artists.  Jennifer Buxton of Braymere Saddlery was responsible for the great-looking tack...she was on last year's cover, too, and Anne Field did the doll and saddle pad 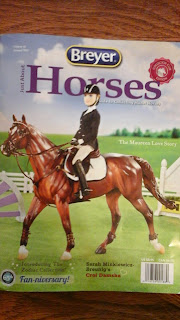 There's an article about improving your model photography, which I haven't read yet... 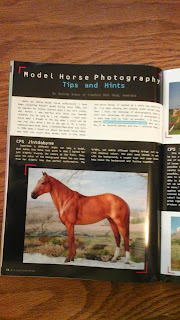 An article on how to make a racing saddle... 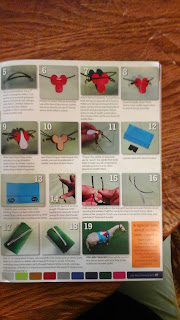 Pictures from Breyerfest 2014 and models that were made available during the year...they said Kashmir was the first model in the Big Cat Series, but it was actually Kimbia 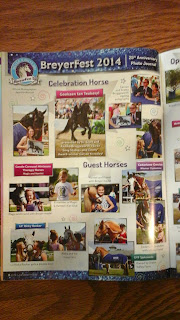 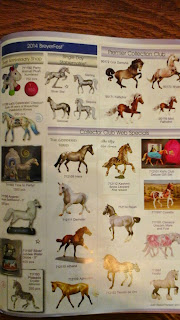 A great article on Sarah the Mink, aka Sarah Minkiewicz-Breunig 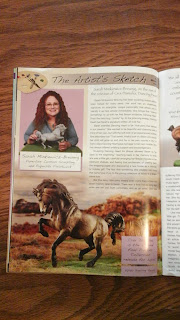 I can't help but chuckle a little when I see people get so excited over a "Mink" original and the prices they go for. Or how big of a following long-time sculpture Kathleen Moody has. I knew them before they became famous in the hobby. From the moment I saw one of Sarah's R/R/H (what they were called back then) at a show in Oceanside, CA I was in awe of her talent.  She was such a sweetheart,  too.   I've probably mentioned it before, but Kathleen moody came to my house once for a house model show that were popular in the early 90s.  It wasn't ling after that when Gem Twist was released.

Anyway, the thing I was most looking forward to, since I'd already found out the Carrick mold on the cover was a test color (grumble grumble), was the 4 Ideal Quarter Horse models 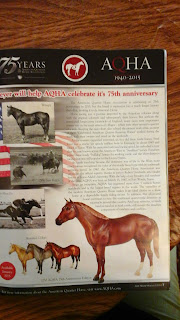 Unfortunately,  all it said was it would be available in January 2015.  I don't know if all 4 will be available at the same time or one at a time, but I'm excited to get them.

In addition to the above, a collector event in the Fall of 2015.  Unfortunately,  I may have a conflict.  The Fresno Chaffee Zoo is scheduled to open their new Africa exhibit in October 2015 and I'd really like to attend that, but if the collector event is close enough to my side of the country to make attendance a likelihood, I'd ne hard-pressed to pass it up.  Hopefully Breyer will give us more information about it fairly soon.  Right now I'm more interested in knowing where it is than when.

Today when I was at work it really hit me how much I miss being around horses.  I haven't ridden in a long time.  All the horses I've been around in recent years have been show horses and wild horses.  Not really ones you can just reach out and scratch on the forehead, jaw or neck.  It really...hurts my heart...to not be able to be near horses.  I know people with horses.  I work with a gal who has one.  And I know people who know people with horses,  but I can't exactly invite myself over to pet and hang out with their horses.  Some days I have an intense ache to be near them.  I suppose I could just distance myself from them, but how do you do that?  Between my model collection and escapades to find and photograph the wild horses on the reservation...horses are too much a part of me.  Of what I am.  Who I am.  Yes, I'm more than just horses, but...I don't know. ..

Well,  I guess that's it for now.   Today is Wednesday and so the work week is almost over.  Yay.