Have I lost my mind?

That is, of course, a rhetorical question.  I don't want a bunch of people leaving comments saying "yes, you are" hahahaha.  I just bought a bunch of stuff on Rio Rondo to make model horse halters.  Yes.  I think I must be insane.  Hahahaha.  I've always wanted to make my own and after a blabber posted a tutorial on her blog, it doesn't look so hard 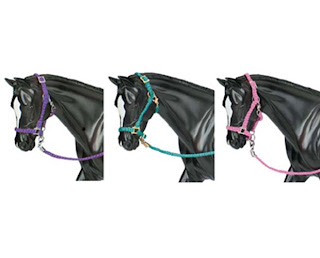 The lead rope might be a little more difficult but I'm sure it can be figured out.  It would be easier (smarter) to just buy the Breyer ones, but I only like the teal colored one and despise pink so if I can make my own then I can customize the colors more to my tastes.  Plus, in the long run, making them myself would be cheaper, I'm sure.  I hope.  Hahaha

Today the Powerball lottery has reached $600,000,000 and has the potential to be even higher before the drawing.  Usually my mom and I just get one set of numbers each but mom wants more than one set today.  So, after I finish my laundry I need to go to Circle K for lotto tickets and also swing by the post office to get a money order for the model I want.  I'm going to bite the bullet and buy a Kalahkaari. 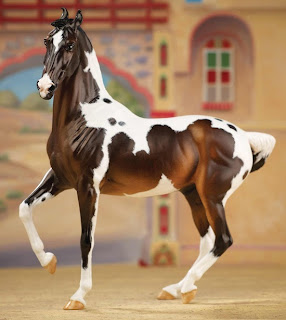 There seem to be more people looking for him than are on the market and it's not likely I'm going to find one for much less.  He's in good shape, too.  I was going to buy one a few days ago but there seemed to be more and more flaws the more we corresponded.  I've never paid this much for a model and from someone I don't know so I'm a bit nervous.  If she'd agreed to Pay Pal I'd have more of a recourse if something happened, but she wants a money order.  I hope my nervousness is unfounded.

Happy Saturday!
Posted by Brenda at 8:48 AM