So, a couple of days ago it was announced that there would be a web special up for grabs on the Breyer site.  They didn't give any real specifics, just mentioned 'mother lode' and made references to gold so a lot of people speculated it was going to be a gold charm model, which is a regular model that had been given a paint job.  A lot of people hadn't even heard about the sale because nothing was put on the Facebook page and initially there was no email about it, but news about it spread like wildfire.  Even when an email was sent out about it, it only contained the barest of information.  Just the date and time and provided a link.  Well, I went to the website at the designated time, but due to the amount of people trying to get in, the page wouldn't load.

Finally, though, I was able to get through and find that it was a set of 3 gold charm Lady Phase models. 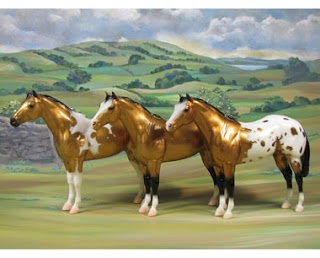 At first I thought it was a great deal.  3 models for $175, but then I got to reading it and saw that you would only get one of the three and you couldn't even choose which one you would get.  They had 80 of the dun (middle) and 10 each of the other 2.  I only wanted the paint, but the other two have been growing on me, but not enough to pay $175 for just one of them.  Anyway, when I was able to get the page to load, there was still the option to buy one but I didn't.  When I went back a few minutes later I got this... 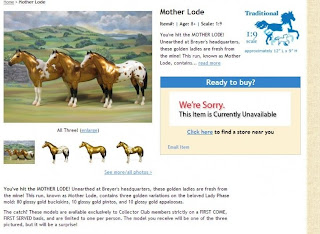 In the span of about 10 minutes, all 100 sold out, much to the anger of many Breyer fans who hadn't been able to even access the page due to the server not being able to handle the number of people trying to get in.  A lot of people were upset and rightfully so.  Some people'd had one in their cart only to have problems during check-out and the model disappearing from their shopping cart.  After many people had given up some started posting on Blab that they had been able to make a purchase AFTER it said they were no longer available, which upset people even more.  What a mess.  I collect this mold and would have been mad if I'd wanted the model, but since I didn't really want it I wasn't too upset.  I feel bad for the people who did want it, though, and couldn't get through or gave up.  Quite a few people have said they won't renew their Collector Club membership because of how Breyer runs these special sales.  I haven't decided if I will or not.

I keep meaning to post a picture of my new horse.  It's the Kalahkaari I've been wanting.  The sale went smoothly in spite of my flub with sending the entire money order instead of just the one portion.  Fortunately I had an honest seller.  I'm quite tickled with this guy.  He's a real stunner.  I just love paints! 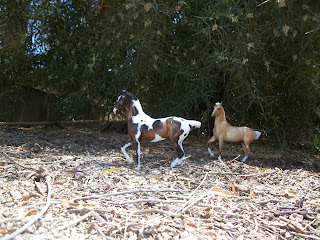 Yesterday I went to Michaels during lunch and bought some ribbon to make some halters.  Now I just need to print out the tutorial and cross my fingers I can make a somewhat decent one.  I'll post my results here when I'm done.