Probably the three worst words a person can see when bidding on something on ebay.  Either on Friday or Saturday I came across some auctions for models at only $5.99 each that were in good shape and nobody had bid on them yet.  They only had about a day and half left of the auction so I went ahead and bid on them.  But I only bid the minimum amount.  I know I probably should have bid higher and considered upping my bid a couple of times, but then I started doing some research (should've done that first) and realized that what I thought were 3 Lady Phase models was actually one 1 Lady Phase (the original), 1 on the Stud Spider mold and 1 on the Ideal Quarter Horse mold.  They were all very nice models and since Lady Phase and Stud Spider are my favorite two, I wasn't too terribly disappointed that I'd goofed.  They were only $6 each so what's the problem?  I also wouldn't have been too terribly upset if I'd gotten outbid...or so I though.  I checked on the auctions this morning before work and have been outbid on 2 of the 3.  There was still time left to bid again, but I decided not to.  If I end up winning the 3rd, great.  It's the one on the Stud Spider mold.  If not, I'm fine with that, too.

On MHB there's a thread that's been going on to show your best model horse photo and there's been some good ones.  One by blabber "la cazadora" 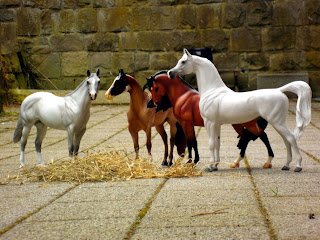 and one by blabber "lora" 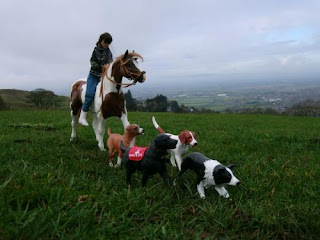 I love the realism shown in both, especially the second one.  Well, last week I was able to contribute finally, and I hope to again in the near future after my trip.  But as you can see, mine pales in comparison.  It's not even in the same league!  hahaha 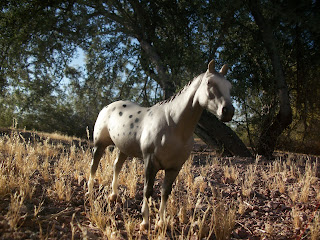 Oh well.  A couple of people said they liked it because of the lighting.  Hopefully I can come up with something better in Las Vegas next weekend.  I'm going to drive out to Valley of Fire State Park.  I just need to decide which horses to take with me.  Probably only 2 and I think my Mesteno has to be one of them.  He'd be perfect.  Then, probably a paint.  We'll see.

Anyway, yesterday was Mother's Day.  I took my mom to breakfast then my brother made us a nice dinner.  He gave her a nice gift basket full of things he'd put together and I felt kind of bad that I didn't get her anything, but if you ask her what she wants she'd say nothing and you can only give someone so many wolf t-shirts.  Hahaha.  While at breakfast, though, there was a couple at a table near ours and they spent almost the entire time on their cell phones.  It was kind of sad actually.  Especially since it was an adult couple, probably in the 30s or 40s.  Younger people I can almost understand.  They walk around carrying their phones their hands because they can't miss a single phone call or text.  I think they want people to think they're more important than they really are, but that's just my opinion.  Personally, I don't think anyone (except maybe a doctor) is so important that they need to constantly be on their phone or have it constantly out and available.  And they certainly don't need to bring it into the bathroom with them while they carry on a conversation, but that's neither here nor there.  I've declared two times that are digital free: when I'm having breakfast with mom (either at home or a restaurant) and dinner.  I have made an occasional exception during breakfast out when I want to take a picture to send a friend in Utah, but that's rare.  I don't answer texts and my phone stays in my pocket.  At dinner, my phone and my iPad are on the counter until dinner is finished and the dishes are put away (unless someone else is doing the dishes that night).  But that's just me and I know many people don't do that unless it's a parent setting the rules for their children.  And that's fine.  I'm not criticizing anyone for what they do, just saying what I do.  hahaha.

Well, I'd better get some work done today.