So, late last week the "check engine soon" light came on in my 1998 Ford Taurus. I have a somewhat faulty sensor that makes the light come on for a few days (or a week) and then it goes away and there's nothing actually wrong with my car. But I have actually had problems in the past with the car and since it's been almost a year since the light was last on, I was worried that something was wrong with the car. I know I have an oil leak and apparently now I have a trasnmission leak, too, but I only paid about $5,500 for the car and have probably put more than that in repairs over the past 5 years so I know I'm driving on borrowed time. On Saturday I checked the "vitals" on my car and put more oil in it and some 50/50 anti-freeze and hoped that would do it. I then started thinking that maybe it was time to get a "new" car. I had already decided to save my tax refunds and put it towards a down-payment, but had hoped I could add to it rather than that amount being it so I started looking at different online car places. I found a Nissan Versa at DriveTime for a decent amount of money and low mileage, but I'm not sure I could afford the payments they were asking, if I was reading it right. Then I went to the website for where I got my current car and found a couple. But then, I found THE one. It's at the dealership where I got my current car. I have never found one on the secondary market because nobody seems to sell them. Then again, I've never really looked. 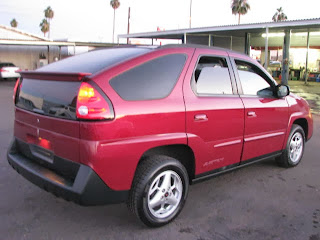 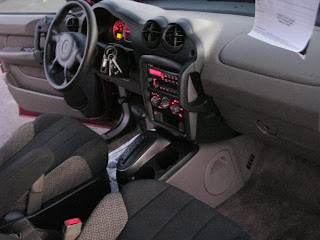 I have liked the Pontiak Aztek since it first came out and have always wanted one. I just think they're the neatest-looking SUV out there. This one is a 2005 and the price is pretty decent plus I can afford the monthly payments and still have some money left over each month for plastic poneh fun-ness. The body is in good shape (I had tried to attach a picture of the driver side but my computer is being difficult) The only think I don't like about it is that it has 115,000 miles on it. If I knew for sure I could get a good 3 years out of it, I'd be all over it. But I don't know what kind of shape the engine and other stuff is in or the shelf life of this particular Pontiac. I would so much love to get this vehicle, but the mileage is making me think with my head and not my heart.

On the way to work this morning...the "check engine soon" light went out. YAY? Or uh-oh? I'm going to hope to keep building on the amount I "currently" have earmarked (I've only gotten state back, don't know when federal will show up) and will have a bigger chunk of change and more options for a new car. But I want the Aztek!!!!!!! hahaha. I need to forget I saw it, though, and keep saving money. I know it's the right thing to do.