After the botched "effort" to deliver my Stone DAH on Tuesday, I finally was able to take possession of him on Saturday.  Of course, I had to go to the UPS will-call to get him, but he's now with his buddies on the Stone shelf.  I'll have to get a picture of all 7 of them.  There would have been 8 but I PIFed the only Windswept Sleigh Bells to a Blabber in England. 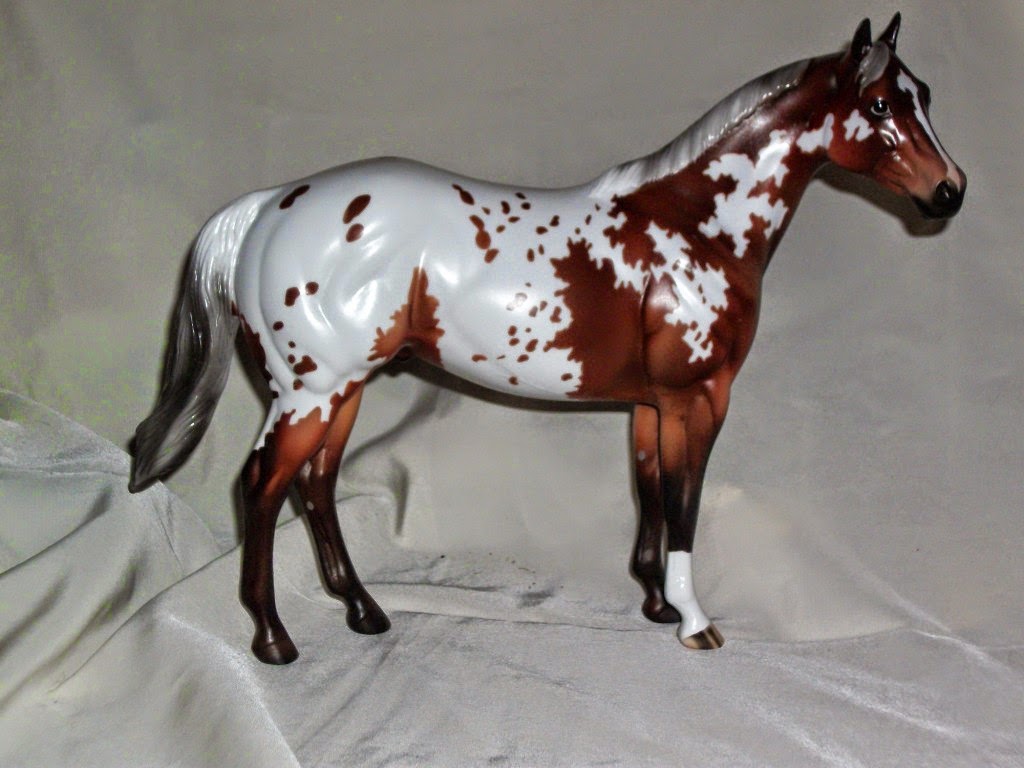 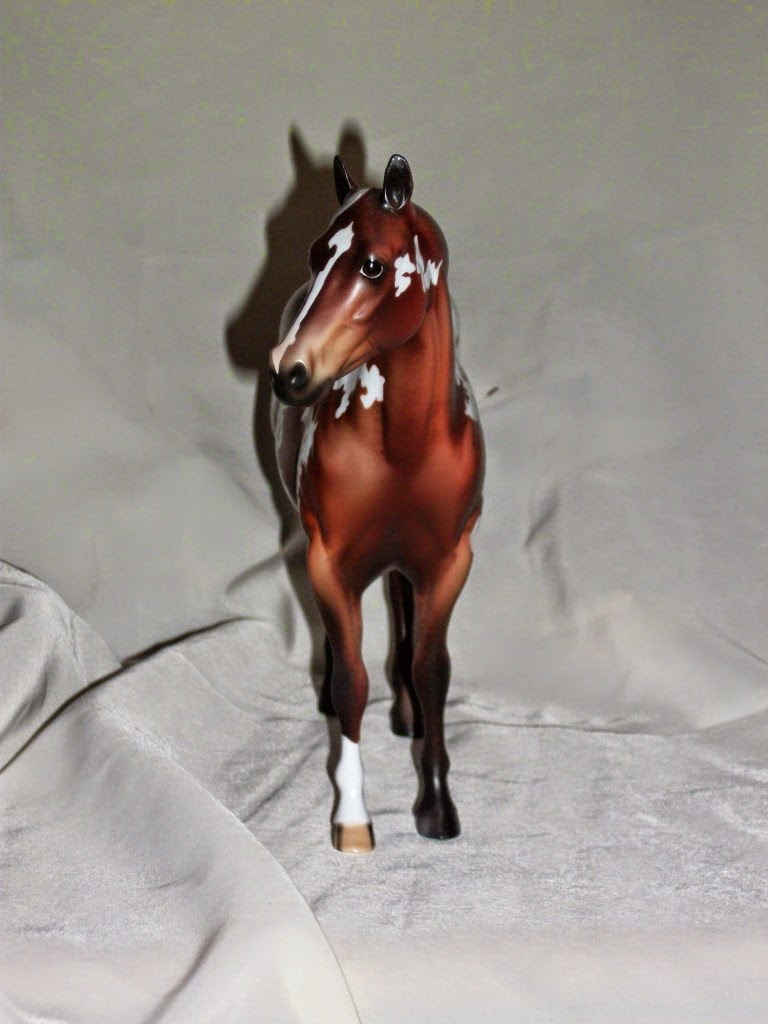 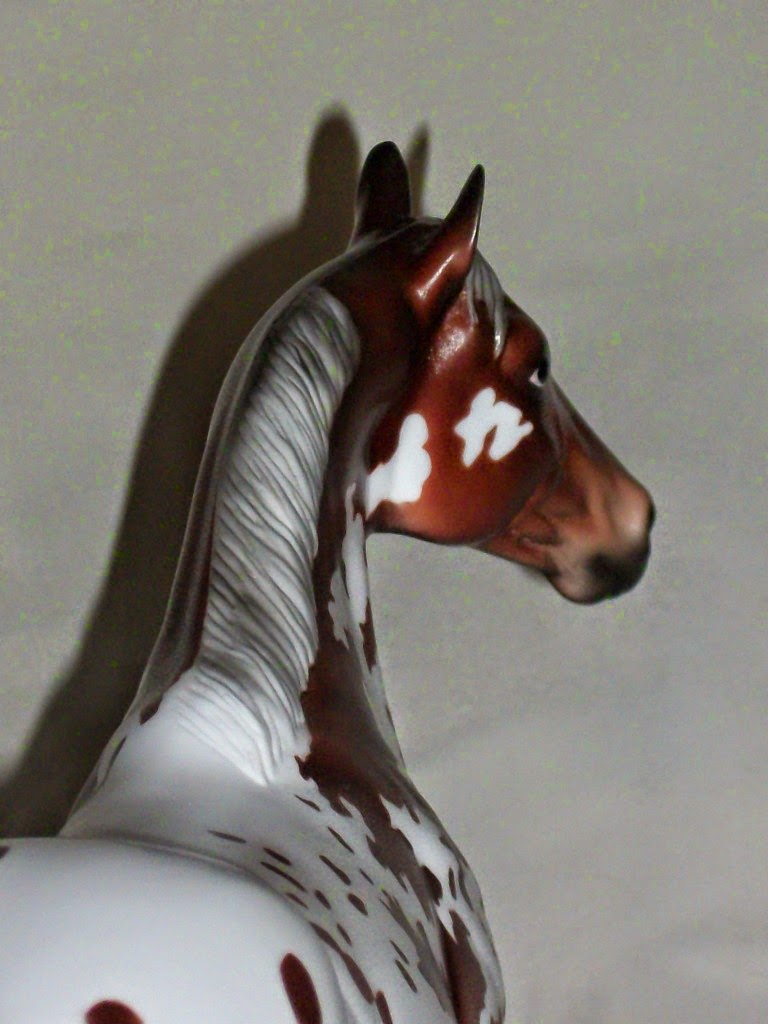 The Short Mane/Tail ISH is definitely my favorite.  This guy is a silver bay with 2013 blaze and the 2012 Equilocity pattern.  As soon as I saw the pattern available I knew I would have to get it.  And while I have no doubt it would've looked smashing in black, I'm glad I ordered it in silver bay and if I hadn't verified that with Stone and had expected black, I don't think I would've sent him back for being the wrong collor.  I really like the colors on this guy and the shading around the muzzle.  Stone had another 30% off sale yesterday during the Super Bowl and I'd been tempted to do an extreme tobiano I have a picture of on my iPad, but discovered I would've only been saving about $20 and so it wasn't really worth it.

I also...finally...unboxed the model I'd won off eBay and received more than a week ago.  Grey Badger II is on the Stud Spider mold and was available in 1998 only through Quarter Horse Outfitters as a special run of 2,500. 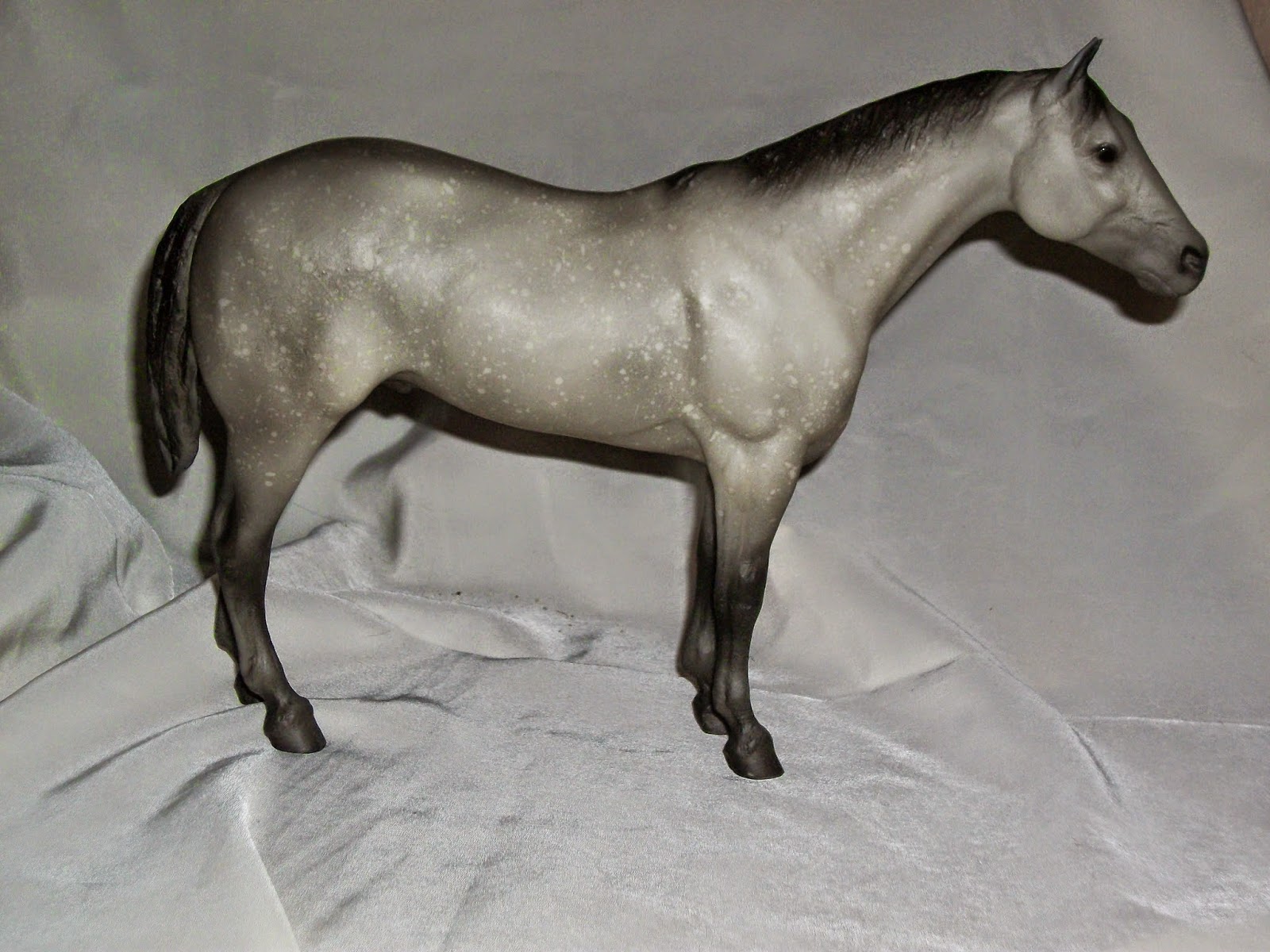 I was surprised he wasn't numbered, but that's okay.  He's in really great shape for his age and I acquired him as NIB.  I don't think the auction listed him as MIB, but he wasn't mint anyway.  I got him for a great deal, too, so a couple of boo-boos is nothing major to me, especially since I don't show.  The biggest boo-boo is a hoof edge rub which is easily fixed if I decided to photo show him.  He's definitely PSQ, but not LSQ, but again, since I don't show anymore it really isn't a big deal.  Here's a shot of him with his brothers
When I was dusting them off last night to take the picture I noticed Banjo had acquired a big paint rub on his left nostril.  I don't remember that being there before, but I'm sure it was and I just never noticed, although I don't know how I could've missed it.  I got him for, like, $12 at an antique store so I'm not going to complain.

So, it's tax time here in the US.  Last Friday I did mine on the internet and waited for an email telling me the IRS and state had accepted my returns, but yesterday I got emails saying they'd been rejected...either because my PIN was wrong or the Adjusted Gross Income from last year was wrong.  Well, I used the same company this year as last year so the AGI shouldn't be wrong and I figured maybe it was the PIN and went to the IRS website to verify the number.  It was wrong.  So I changed that and re-filed.  A short while later I got an email saying Federal had been accepted and today I got an email saying State had been accepted, so now what?  Now I sit back and wait for my money.  The amount I'm getting back would pay for my trip to Breyerfest perfectly, but I know that as soon as I commit that money to it, something will happen to my car.  So I'm going to do the adult and responsible thing (shudder) and put 99% of it away for a down payment of a new car for when that time comes then take a little bit as "fun money" and buy something for myself.

I had a pretty good weekend.  Went and ran some errands on Saturday and Sunday mom and I did our usual grocery shopping.  SyFy was having a "bad weather" marathon so I spent much of the day watching such movies as Polar Quake and Ice Twisters.  We did watch some of the Super Bowl.  All 3 of us were cheering for Seattle since my brother and I were both "hatched" there so it was nice to see them get their first Super Bowl win.  Most of the commercials, in my opinion, were stupid and meaningless, but I did like the Coke commercial in different languages and, of course, the Budweiser Clydesdale commercial.  I'm glad the puppy got to stay at the farm in the end.  The way his owners kept taking him home and he kept going back to the barn made me sad, so I was happy he finally got to stay.  Yes, I'm the sappy type who cries at commercials.  I admit it.  hahaha.

Well, I'd better get back to work.  Happy Monday, All!