It should have started out like many other days that had come before it. Since I had a doctor's appointment, I had taken the day off and the original plan was to go to the park for a couple of hours then go meet up with a friend and hang out with her for the day (she was going to come to my appointment with me), but none of that happened. No, I take that back. I did go to the park. Sunday night we got into a bit of a text messaging battle because she was being stupid and immature so that part of the Monday plans were over. Monday morning I woke up at 5:45am after apparently hitting the snooze button several times but I don't remember doing it. I finally got out of the house at about 6:30 and usually I'm almost at work by that time. Even though I wasn't going to work, certain people in my house know my routine, but she didn't question it, just commented I must have been running late. So, I went to the park where I spent the next 90 minutes not answering M's question about whether or not I was still going to come over at 8am as planned. As 8am drew nearer, I decided to go to one of the several Indian gaming casinos in the area...and by area I mean within a 30-45 minute drive. The closest location I don't like so I went to their second location which I'd never been to before...the Talking Stick Resort. After finally figuring out where I could park, I went to the casino/hotel entrance and encountered something that is very common in Las Vegas, but much less-so than the Phoenix area. Apparently even valet parking at Indian casinos don't put fancy cars in the valet lot with the others 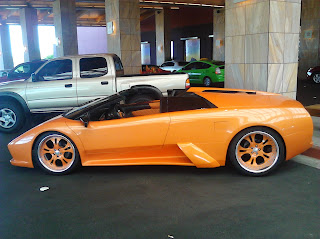 When I was a teenager I would've been drooling all over this Lamborghini. I'm not a fan of the color, but that's okay. I still would've liked it. My friend Shannon and I were all about the fancy, expensive sports cars. We would go to the Porsche dealership in our neighborhood and get the car brochures they hand out to people who are interested in the cars. It was obvious we didn't have the money for one, but we were only maybe turned down once or twice. Anyway, I had brought $40 to spend on gambling and after losing the first $20 on video poker, I decided to save my other $20 and maybe find something to eat. But then I saw a machine that had a bunch of games the other machine didn't have so I decided to see if it had video Black Jack. I was pretty sure it didn't since I have yet to find video Black Jack outside of Vegas. Not even Laughlin had it that I could find.  Anyway, imagine my surprise 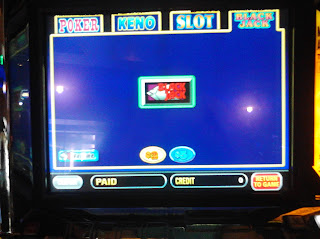 The minimum bet, however, was an unpleasant surprise, but I still had to play. I made a couple of stupid choices in my playing and with the payout, even on a black jack, not very high, it wasn't long before I was out of money.