So many things happened that it's hard to know where to start.  I guess Thursday night would be the best place.  Thanks to their stupidity, the police caught up with the Boston Marathon Bombers.  That would be the bombers' stupidity not the police.  The events of Thursday left one bomber dead, but it also resulted in the end of the life of a  young MIT police officer and injured 15 other officers.  Friday saw the capture of the second bomber.  I can't help but think of all the things that fell into place for that to happen.  If the homeowner hadn't happened to go out for a smoke.  If he hadn't noticed the broken tarp on his boat.  If he hadn't noticed the blood on the tarp.  And what about if when he climbed the ladder to look inside the boat the bomber hadn't been passed out and had shot the homeowner?  Everything fell perfectly into place and the 2nd suspect was caught.  Thank goodness.  Now Boston can start to heal and return to a somewhat sense of normalcy, which is important after a major tragedy.

How about Neil Diamond, huh?  Out of the blue the man shows up at Fenway Park 40 minutes before a Red Sox game and asks if he can sing Sweet Caroline.  No warning.  No expectation of money.  Nothing.  Just a man wanting to show his support. 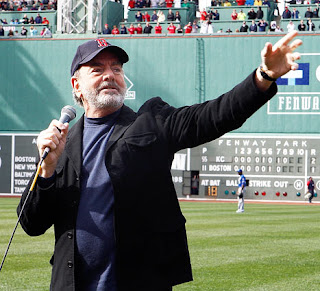 I became a fan through my parents but stay a fan because I enjoy his music (mostly the older stuff) but after hearing what he did, my admiration for him skyrocketed.  Apparently Fenway Park has been playing Sweet Caroline during the 8th inning for a number of years and so he decided to show up to sing it in person.  You are a class act, Neil.

On April 21st, the last home game of the season for the Boston Bruins, they had their annual Shirts Off Our Backs night.  Most, if not all, NHL teams do this at the end of the season.  They (supposedly) pick seats at random to receive their game worn jerseys at the end of that game.  I say supposedly because I think they only pick season ticket holders.  Apparently you're not a real fan worthy of a jersey if you're not willing to shell out thousands of dollars for season tickets.  Anyway, last night instead of giving the jerseys to the fans, they gave them to the first responders from Boston that were in attendance at the game.  That's pretty cool and I wish they did something like that more often rather than because of something like the Boston Marathon Bombings.  None of these photos are mine and were acquired from the team website. 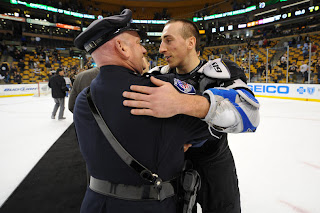 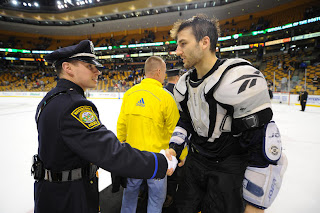 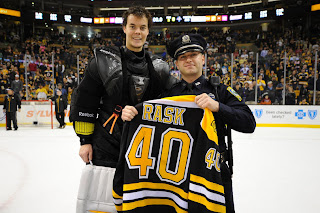 I still think professional athletes are a bunch of overpaid babies (especially hockey right now because of 2 lockouts in 5 years), but you can't help but like them when they honor the people who work daily to save and protect us.  And, well, I just have too many good memories of my time with the local NHL team to hate them 100%.  hahaha.

Guess I'd better get to work.  Happy Monday!