Okay, so, I had my scanner programmed for my San Diego trip (and local stuff, too) but I keep going back and forth between going to San Diego and going to Las Vegas and currently it's Vegas so I needed to reprogram my scanner for Las Vegas.  You might be wondering "why bother?"  That's what my friend asked last night.  Not in so many words but she asked why I was putting LV frequencies in my scanner if I couldn't hear it from Phoenix.  Oddly enough, she never questioned why I was inputing San Diego  Huh.  Oh well.  Anyway, I was getting tired of re-programming my scanner.  Even with the software that does most of the work for me, it's still no fun looking up the individual systems and selecting the ones I want to import.  So I decided that since I'll likely be going to San Diego before my zoo membership expires next March, why not upload both San Diego County AND Clark County (las vegas) and have all the bases covered?  Makes sense, right?  On Sunday that's what I did...or...at least I thought I did.  I did all my looking up and importing then uploaded everything to my scanner.  Then at work yesterday, I turned on my scanner and something was odd.  Usually I et a lot of "hits" from Maricopa County Sheriffs Office and Mesa Police.  Those 2 agencies make up a lot of what I hear at work.  So I went to the scan list they should have been under, but those two agencies weren't there.  How the heck did that happen?  So I brought my scanner home again yesterday (usually it lives at work during the week) and did the whole thing all over again..setting alerts and such.  Then, I went to upload, but accidentally hit the wrong button and lost...everything.  I would have to start from scratch.  Ugh!  By this time it was 9pm and I was tired and I didn't want to deal with it anymore.  Flash forward to 4am this morning.  I'm awake much earlier than normal, but my mind is clear so I decide to go ahead and give it another shot.  This time...success!  Hurray!  Not only did everything upload like it should, but so did MCSO andMesa.  Yay!  I won't know how successful SD County and Clark County were until I'm actually there, but at least I have the local stuff.

Now, to address why I would go through the trouble of doing this...it's what scanner enthusiasts do when we travel.  We like to take our scanners with us so we can hear stuff other than what we hear every day.  I can listen to much of San Diego online, but there's no way to pause it on a channel if something interesting is going on and there's stuff I want to listen to that isn't provided through the online feed.  I still listen, though.  hehehehe.

I'm probably going to pay for being up so early...later on when I start to fall asleep at my desk at work...but it's okay because I know my scanner is...for the moment at least...programmed properly.  hahaha.

On Sunday I was watching TV and on HGTV was a show called You Live In What?  I don't usually watch that show but according to the on-screen program guide they would be featuring a horse barn that had been converted into a house so I decided to see what it was all about.  This particular barn had special meaning to the wife as she used to ride out of it when it was still a working stable.  They remodeled part of it into usable living space and also redid some of the stable area for their horses.  It was really a neat idea and I wanted t share photos, but was unable to find any so...I guess that's it.  I was going to post  a photo of a horse I really like, but my computer is being stupid.  Maybe I'll see if I can do it from work.  Stay tuned...

Okay, I'm here at work and I'll try to upload a couple of photos.  The first one is of Aberkrombie.  I don't usually like so much white on a Paint but I liked him the moment I first saw him.  And his person, Breanna, is really nice.  He's such a beautiful mover and the pair are quite successful in the show ring.  Last season they were Reserve Champion. 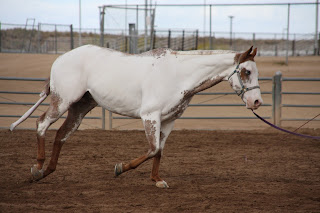 I don't know the name of this other horse, but I've seen her a couple of times at the Paint shows.  I like her markings and she has such a sweet-looking face. 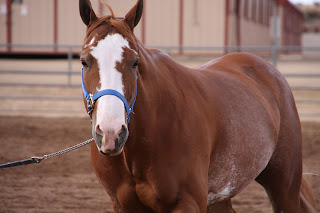