I'm so proud of myself for finally making one and while I know it doesn't look perfect, I still like it and isn't that all that matters?  I know I'll get better the more I make.  I think I need a different kind of adhesive, though.  I'm not sure how long the halter will hold up with the stuff I used, even though it was for fabric.

For starters, although I had a tutorial from another blog, I wasn't real sure where it was at the time so I dug out a catalog from SmartPak to use as a reference. 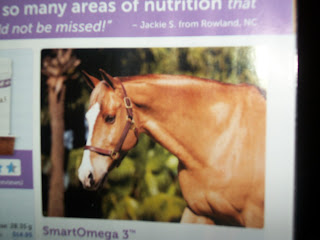 I then gathered my supplies and model.  I used Wapiti and decided of the colors of ribbon I had on hand, the light blue would look the best on him 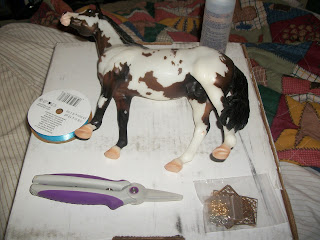 Then the "fun" began.  hahaha.  It probably took me close to two hours, if not longer, to make the one halter because there's so much measuring and cutting and measuring more and gluing.  Surprisingly, I only made one mistake...although I made it twice 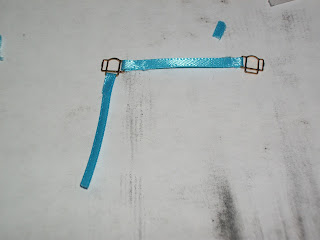 I wasn't paying close attention and ended up gluing one of the cheek pieces upside down so the excess was on top instead of the bottom where it wouldn't be seen.  I also kind of goofed on the part of the halter that goes around the poll.  The end was frayed a bit and instead of grabbing my scissors and trimming it, I pulled on it and it unraveled.  Ooops!  So I had to do that one again.  Oh well.  I should've gotten more "in progress" photos, but I didn't think to do it.  Next time, for sure.  Anyway, here's the finished product.


I'm not sure I got the cheek pieces right.  Hopefully, if there's a tack-maker who reads this thing, can comment and let me know if it's too tight or if the cheek pieces are off.  Normally I don't ask for criticism on something I work hard on, but if I want to do a better job then I'm going to have to ask for it.  Please, though, go easy on me.  hahaha.

On Friday (I think it was Friday...maybe it was Thursday...?) I got my 2nd horse from Peter Stone.  This one is called Sweet Emotion.  He'll need a new name, of course.  My brother examined him closely like he did Speckled Jelly Bean then gave him back without saying anything.  I asked him about what he thought and he said the model wasn't anything spectacular and we agreed that it was good, then, that it wasn't HIS model.  hahahaha.  I happen to like him.  Sometimes simple can be spectacular.  No, I don't consider Sweet Emotion to be spectacular, but he's pretty neat in my eyes. 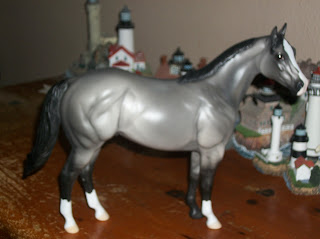 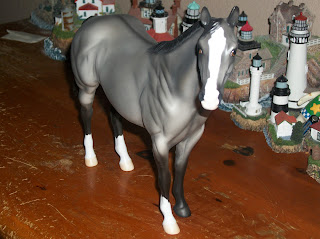 So, sometimes I like watching the SyFy Channel.  Usually when they're having their cheesy scary movie marathons about giant snakes or gators or sharks.  They're good for entertainment value, but the acting in it can be HORRIBLE.  Yesterday I was watching one called Mega Python vs Gatoroid.  Basically it was about some big Pythons who were killing the gators in the Florida Everglades.  Tiffany (from the 1980s hit "I Think We're Alone Now") played a park ranger who decided the best way to get rid of the snakes and protect the gators was to feed the gators steroid-induced chickens.  Well, that's all well and good except the gators kept getting bigger and bigger and when the pythons snacked on the gators it caused them to get bigger and bigger.  Out of all the cheesy horror movies I've seen on SyFy, I think this one wins two thumbs down for BAD ACTING.  hahaha.  It was funny, though, to see Tiffany and Debbie Gibson (also from 80s fame, though her hit song escapes me at the moment) in a movie together and go from being enemies to fighting together to destroy the snakes and gators.  And despite the horrible acting, I'll continue to watch these types of movies simply because they're there.  Oh, there was a funny part to the movie.  They were having a fund-raising reception to raise money for the Everglades and they kept saying that a monkey was going to be the guest of honor and they were trying to figure out how to make that work.  Well, it turned out it wasn't a monkey, but rather Micky Dolenz of the Monkees.  The funny part was when he was on stage and one of the snakes came down and gobbled him up.  It was so unexpected.  Don't get me wrong.  I love the Monkees and Micky is my favorite, but it was still funny.