Let me start out by saying hunting horses is never a sure thing or an exact science.  There's several places I know to look for them because I've seen them there before, but they're not always there.  They move around a lot.  Usually when I don't see any I can go by "my" ranches and shoot some domestic horses.  Sometimes neither one cooperates.  Apparently, now, we have to add the CAMERA not cooperating!  And the weather.  Well, I try not to go hunting when it's raining because who wants to see horses standing around getting wet?  Not me.  But the time of day has now become an issue. 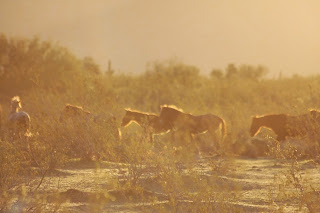 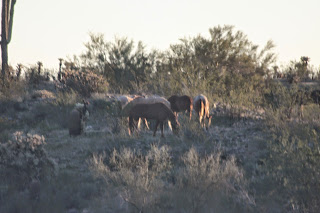 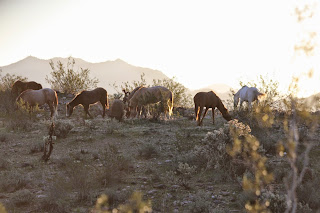 This particular group I shot last week.  I was driving along the highway when I saw a single horse plodding along, munching as she went.  I was going in the opposite direction so I got to a place where I could turn around and by the time I caught up with her, I saw something much more exciting.  Something was really kicking up the dirt and as I went further up the road I saw it was the rest of the herd.  They were running towards the hill they're standing on in the above pictures.  It was the COOLEST thing ever.  I wish I'd gotten pictures of that.  Or better yet, video, but we were both moving and that wasn't going to happen.  Unfortunately, not long after these pictures were taken my camera started bugging on me.  Dead batteries.  AAAAAAAAAAAAARGH!  Oh well.  From here I went and drove around some more, but didn't see anything exciting.  I finished the day getting an oil change.  Yay.

Yesterday I went out again and thought I was going to be hugely disappointed.  I checked all three of my spots and nothing.  So I went to a different area I'd only visited once and...nothing.  As I was heading back to my main area something on the side of the road caught my eye.  It was three horses.  So I did a quick u-turn and pulled off the side of the road near where they were.  They had just crossed the road and when I stopped, they started to move deeper into the brush 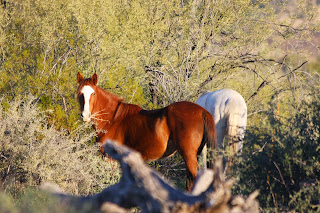 but I still whipped my Canon out (can't shoot horses without a canon!) and began shooting.  Well, my scanner was on and it had been fairly silent, but then the chatter picked up and...so did their heads. 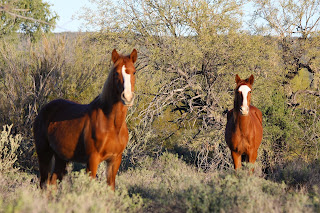 Then they did something very unusual...they started walking TOWARDS my car... 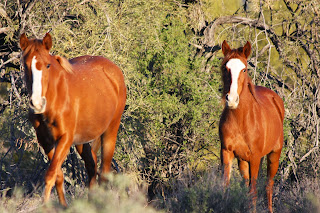 I don't know what it was about my scanner, but it seemed to really interest them.  The grey one was a little hesitant to get very close, but "he" no longer seemed concerned about my presence 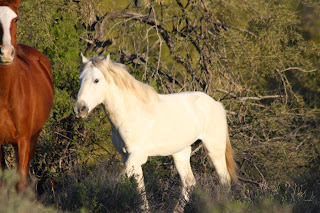 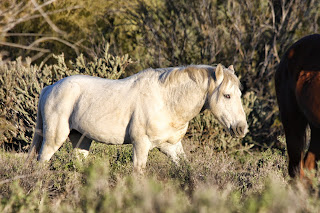 They seemed to want to have their picture taken 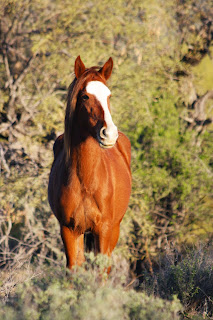 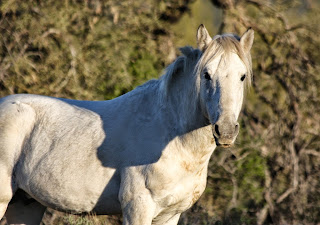 Then I remembered I had my smaller camera with video capabilities so I quickly shot some video...not much, but hey...it's something!
Finally, I left this trio and headed back the way I came and guess what I came across...yup...two more horses.  I saw the grey one first 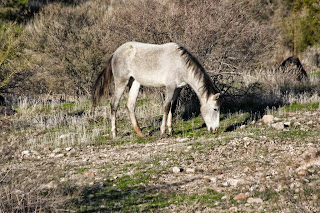 And then it's companion, but that one was too deep in the brush to get a good picture of.  So I continued back down the Beeline and...yup, you guessed it...more horses.  This one was in the same spot as the ones last week. 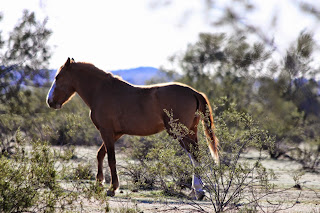 I don't know where the rest of the herd was, but I'm sure they weren't far behind.  Look at the roman nose on that one!

Wow.  What a day!  I doubt I'll ever have another day like that one, but that's okay.  It was truly a special experience.

Well, I'd better get back to work.  I hope you all have a great Tuesday!