Police horses around the world...

I'm finally getting a chance to do this post!  Hurray!  hahaha.  I've been wanting to do it for almost 2 weeks now so it's exciting for me.

Okay.  So.  On this Facebook group, As Seen Through Horses' Ears, there's little pictures of members at the top and I kept seeing this one that left me scratching my head 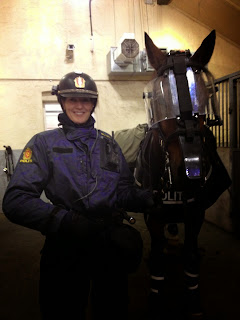 Since the picture was quite small it didn't look like a real horse.  I thought maybe it was like one of those puppets they used in the theater version of War Horse.  After seeing it several times I finally clicked on the picture to hopefully see a larger one and discovered it was, in fact, a real horse.  It's a police horse in Norway and I guess this is its normal patrol equipment.  Wow.  I can't imagine the horse enjoying having to wear so much stuff.  I realize it's to protect them, but look at it all!  Is that really a horse under all that?  I still think it's a robot or a puppet.  hahaha.  Anyway, it got me to thinking about police horses in different parts of the world.  While Norway seems to be the only agency with practically full-on body protection, there's other agencies that use protective gear.  Australia, for one 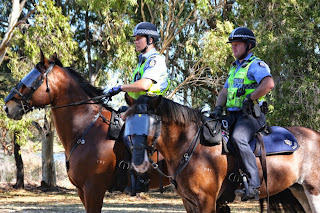 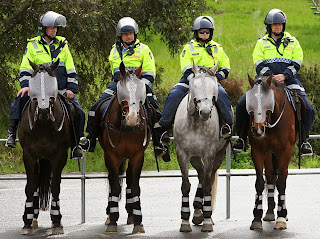 And Toronto, ON in Canada also uses face shields for their horses 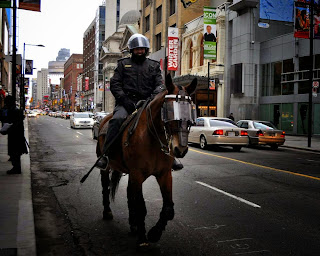 As well as some sort of "knee pads".   I'm thinking this stuff is riot gear because I really can't imagine the horses needing it on a daily basis just to do their job and if it's that dangerous that they do need it, I'd think maybe the horses just shouldn't be used in that area then.

I don't think I've ever mentioned this before, but I used to work with the local police department's mounted unit.  When I was in the Explorers, I helped out at the barn training the new officers.  In so doing, I developed quite a crush on one of the officers that, looking back on now, makes me cringe 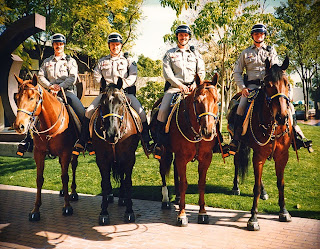 He's on the chestnut on the far left.  I don't know why I liked a guy like that.  He turned out to be quite a jerk anyway so it was no big deal when things fell apart.  As you can see, though, no face shields or other such protective equipment on the horses.  Granted, this was a publicity photo, but still...Even the NYPD doesn't use all that stuff during patrol... 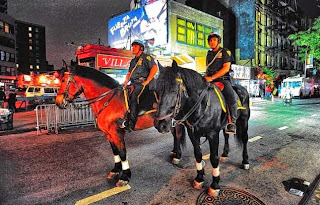 Unfortunately, many cities are having to do away with their mounted units due to budget cuts.  San Diego PD had to shut theirs down a couple of years ago and they sold their horses to the public.  In Arizona, the Maricopa County Sheriff's Department has a mounted posse unit, but the horses are owned by the individual members not the county.  Customs and Border Patrol also has a mounted unit.  Scottsdale still has theirs, but I think Phoenix did away with theirs, although my brother claims otherwise.  Tempe still has theirs, too 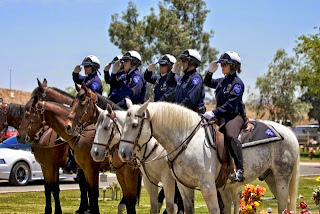 I worked briefly at their barn as a volunteer until I discovered I had a contact allergy to bougainvillea and there was lots of it around the stable.  Later I tried to get a paying job (the plants had been removed) but when they asked me to identify the parts of a horse on a diagram, I choked.  hahaha.  I couldn't name anything.  I was disappointed, but not surprised I didn't get the job.  Oh well.

Anyway, I guess I'd better get to work.  It's Wednesday.  Yippee!  Have a good one!