My Adventures In Policing...

Over the past couple of days I've been chatting with Alyssa M about siblings and knowing stuff and I mentioned I had worked for two different police departments and she asked if I had ever gotten to ride one of the police horses so I decided it was as good a time as any to talk about my experiences.

Now, when I say "work" I don't mean work in the regular sense.  I didn't get paid, but that didn't bother me, although I had to stop in order to get a paid job, but I was "paid" in exposure to horses.  In 1989 I became a Police Explorer for the Scottsdale Police Department.  I won't go into the boring details of what we did, but I learned how to do building searches and traffic stops plus we went to other departments and competed against other Explorer posts for trophies and awards.  My first competition we drove down to Tucson and it actually snowed a little while we were down there.  During the lunch break, when everyone else was going out for lunch, we were firing up the grill behind one of the building at the Arizona Law Enforcement Training Academy (ALETA) and getting a game of basketball going.  When some of the instructors saw us out there, they invited us in to share their pizza they'd ordered.  But that's off-topic.  hahaha.  Anyway, I got to know one of the mounted officers, Marcy, and would often go to the station when I knew she'd be getting ready to go on patrol and we'd chat for a little while.  She was the one who told me they were looking for help in training the new officer because she would be leaving the unit soon.  She wanted to make Sargent and you can't promote while on the mounted unit.  For the record, she retired a Lieutenant while the officer I helped train retired as an officer.  Some ambition.  hahaha.  Anyway.  So I started going to the police barn a few nights a week.  Marcy and Kirk would ride the horses to one of the arenas while Gary walked with them or Gary and Marcy would walk while Kirk rode.  He was the new officer so he always rode.  My job was to drive the trailer down to the arena.  I'm not real sure why they wanted the trailer there...maybe in case of emergency...but I drove it down to the arena and back to the barn, empty.  While at the arena, I always played the bad guy so Gary could videotape Kirk and give instruction.  I think I videotaped a time or two, but I don't remember 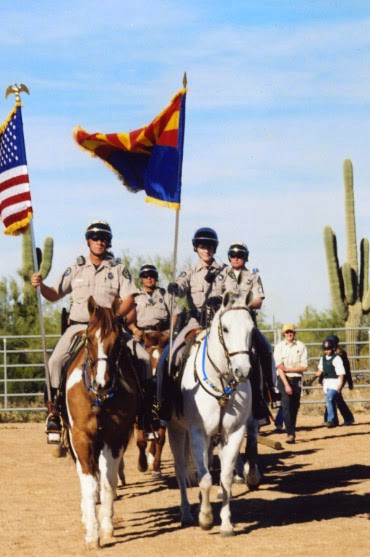 It didn't take me long to develop a crush on Kirk, but that's neither here nor there.  I spent a couple of months helping him get used to Rio, the black quarter horse they had recently acquired, and police work from the back of a horse.  It was a lot of fun and I'm glad for the opportunities it provided me with being around the horses.  I still wanted to be a police officer at the time so it was good exposure for me.  One night, instead of riding back to the barn, Rio was loaded into the trailer to be driven back.  I wasn't told why, but it didn't really matter.  But now I wasn't allowed to drive the trailer.  When I asked why since I'd been doing it for so long already, Gary asked if I'd ever driven a horse trailer with a horse in it.  I said I had not and he said that's why I wasn't allowed to drive the trailer that night.  It was the only night, though, and Kirk and I had a nice chat during the short drive back.  He was always real nice to me.  Always made sure to involve me in the conversations.  During one scenario I complained that he never said "Please" or "Thank you" so he wrote this note on a piece of steno paper apologizing for never saying please or thank you and to please forgive him blah blah blah.  I kept that note for the longest time, even after it became apparent nothing would ever happen between us.  He ended up re-marrying his ex-wife and it turned out he was a jerk anyway so it all worked out in the end.

Alyssa asked if I ever got to ride any of the police horses...Once.  During Kirk's training, the unit asked the Explorers to come down to WestWorld so he could have some experience with crowd control when there was more than two people so most of our post, about 12 of us, met down there and did a few scenarios where we acted like an unruly mob of people and the two officers would "control" us (usher us into a group) or chase one of us individually.  Afterwards we hung out and were talking and one of the girls said she had never ridden a horse and was kind of afraid of them so they let her ride Rio for a few minutes around the arena.  Me being me, I wanted to ride, too, so I said I hadn't been on a horse since my fall the year before so they let me ride Chip.  I wish I had pictures.  I used to have pictures from when they did the public safety demonstrations, but I guess I threw them away or something.  Not real sure why, but I'm guessing I did. 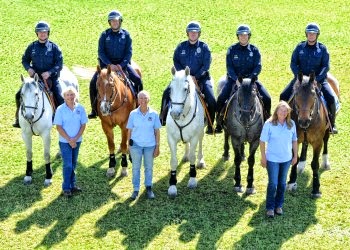 My time with the Tempe Police mounted unit wasn't near as exciting.  I saw there was an opportunity to volunteer at the barn so I put in my "application" (I was already a volunteer with the department) and was allowed to go.  My first and only night there I was asked to muck the stalls and was even complimented on how thorough I was.  After that I helped the officers pull the Bougainvillea plants and that's when I discovered I had a contact allergy to them and ended up breaking out in a rash.  Not fun.  Obviously I couldn't work at the barn if I was allergic to the plants they had there.  I was bummed, but itching like crazy was no fun.  I think I got to pet a couple of the horses at the barn, but because of my short time there I never really formed a connection with any of the officers or horses.  Heck, I couldn't even tell you the names of any of them.  Later I tried to get a paid job as a groom, but I froze when they showed me a diagram of a horse and asked me to name parts of it.  I couldn't even tell the difference between the fetlock or the forelock.  I still have a problem with it.  hahaha. 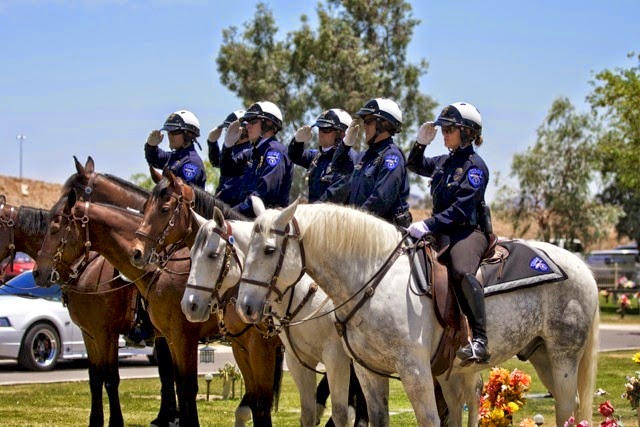 So, there you go.  My adventures with the Scottsdale and Tempe Police mounted units.  Nothing too incredibly exciting, but it was fun and something I wouldn't give up.  There's things I would change, sure, but until someone invents a time machine, it's not possible.  hahaha.

**eta** I meant to mention this before, but the difference between riding a trained police horse and a stable horse is like night and day.  I'm talking the 1 hour rental stable horses that go on several rides a day but rather the once-a-day, out for 4 hours minimum horses.  Anyway, Chip (the police horse) was very push-button.  He almost seemed to anticipate your request before you could make it, but not in a negative way.  If you've ever ridden a push-button horse you would know what I'm talking about.  You only have to give the slightest hint of an aid and he picks up on it immediately.  You don't have to apply a log of leg pressure to get him going let alone "kick him repeatedly" just to get him to take a few steps.  I've ridden too many rental horses like that...again, the 1 hour rentals not the longer ones because they tend to take better care of their animals.  But Chip...and Larry, the only push-button rental horse I've ever ridden, were dream horses.  And Chip was, almost quite literally, bomb-proof.  You have to be when you're a police horse.  :-D