Hurray!!!! My original plan was to go out horse hunting. As the weather gets warmer, my opportunities are getting fewer, I believe. But that plan was nixed when my brother said he needs a ride somewhere. Bummer, but it's what you do for family, right? Well, today is a race through ASU for Pat Tillman, a former NFL player-turned Army Ranger who was killed by friendly fire 10 years ago and the race course affected our route home, but I'll get to that in a bit. When I saw this, I had to take a picture... 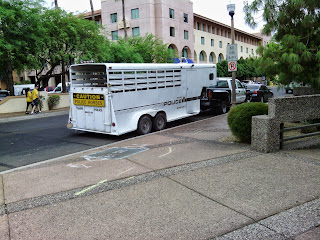 As we drove home from downtown Tempe, I spotted two police horses overseeing part of the race course so I dropped my brother off at home and went out to get gas and lottery tickets, but I also wanted to go back by and try to get a picture of the horses, but also just to see them again. I figured they would've moved on by the time I got back, but as I got closer to where I'd see them, I spotted the white one... 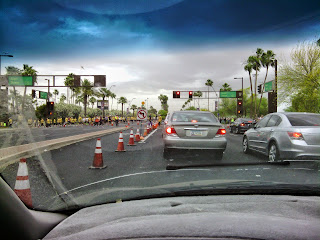 If you look at the 'no left turn' sign you'll see a guy in a blue shirt and a girl in a yellow shirt to his left (right in the picture) in between them you can see the white horse. Trust me, he's there.   You may have to click on the image to see it larger.  Why didn't I wait a few seconds before taking the picture, you may ask? I'll tell you. I took this picture and was going to try to get a closer shot, but when the light changed, the horses crossed the road to the other side and I couldn't get a shot. Bummer. Oh well.

On my way home, I considered calling home to say I was going horse hunting. The weather is 'perfect'. Heavily overcast. Breezy. Less than 70 degrees. But it was also 9am and, on a weekend, that means more people around and less likely of a chance to see them.  Oh well.  I have a few days off in mid-may so I'll go look then.

Weather-wise, today is definitely unusual for late April.  It's snowing at the higher elevation and chilly and overcast and cooler here.  The sun just peaked through, though.  Grrrr.  It's making me want to be outside or near and open window and work on one of my stories.  The ideas are spinning in my head.  If I had a horse or was able to ride I'd be out Doug that.  It's a perfect day for that.  Heck, in my opinion, EVERY day is a good day to go for a ride or just hang out at a barn.