Nothing Exciting To See Here...

Hehehehehe. Hahahahaha. This isn't the post I had intended to do today, but since I can't find the USB cable for my camera, this is the one that'll have to do. I have 4 USB cables running around me right now, but none of them fit. The part that goes into the camera is very small. Grrrr.

So, what have I been doing in the weeks since my last blog post. Nothing terribly exciting. I wish I could say I was away because I got a new horse and was working with him. Or I got married. Or went on an extended trip (well, my brain did.) I'll stop short of saying I had a baby because that would take a miracle since the oven was removed in 2008. hahaha. Anyway, I just have not felt much like blogging. A couple of times I thought about it, but never got around to it. I apologize to the people who read this thing regularly. Anyway, here's a basic run-down of my activities. I bought a couple of models. My Stone DAH Arab arrived. I bought a new scanner 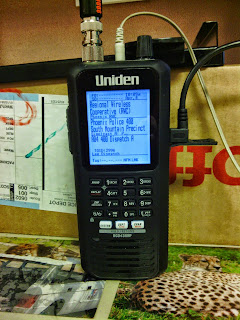 I had a birthday. And I helped my mom win more than $250 at a casino.  I bought the scanner in Mid-March.  I blogged about this scanner last month, I think.  Or maybe a couple of months ago, I don't remember.  I had hesitated to get it due to the cost and the problems some people seemed to be having with it, but decided that I rarely have that kind of money "lying around" to spend on something nice for myself and I never get to buy something "fresh off the boat" (ie:super brand new/just been released) so decided to treat myself.  The reception in my office building didn't improve with this, but that's okay.  I just hope moving to the main building in June doesn't make it worse.  The biggest improvement over my Pro-106 scanner is the LCD display.  It's significantly bigger on the Uniden and so it shows more information.  Like, with the 106 it would show "400 A" and Phoenix PD and a couple of other things like that it's the Regional Wireless Cooperative, but on the Uniden it shows all of that plus the precinct itself.  In the case of the above picture, it's South Mountain Precinct.  I'm pretty happy with it so far, I just wish it hadn't cost so much money!  hahaha.  But I was getting anxious for it to be available at a "local" (it's 2 cities over) ham radio shop because when I'd decided to buy it, the money started to burn a hole in my pocket.  hahaha.  I even took the day off from work so I could drive over and pick it up.  I could've ordered it from them online and they would've shipped it for free, but then I'd have to explain to the family why I bought another scanner and they'd want to know how much it cost.  Yes, I'm an adult and I am free to spend MY money on what I want, but some things are just better kept quiet about for awhile.

I've had a few days off from work and went horse hunting, but was unsuccessful in spotting any.  Not a single one.  I think I've gone 3 days in a row now, which makes me unhappy.  I know they're out there, but I haven't been in the right place at the right time.  Oh!  I take that back.  I DID see 2 horses, but they were in the middle of the river and not where I could easily photograph them.  And speaking of horse hunting...I had boughten a Tonto Park Pass, but apparently neither county nor the forest guys seem to pay much attention to see if you have one or not.  On March 28th I was at a location where you needed a pass and I was parked in a parking spot (the signs say any parked vehicle needs to display the pass) and my pass was in the glove box.  I was outside my car, sitting on the ground sort of and a deputy sheriff drove by and even parked in a spot nearby and I was waiting to see if he was going to come over and wonder where my pass was, but less than a minute later he left.  Maybe he got a call, I don't know.

Yesterday my mom and I went grocery shopping and when I was getting a couple of boxes of Drumstick ice cream cones, I noticed this... 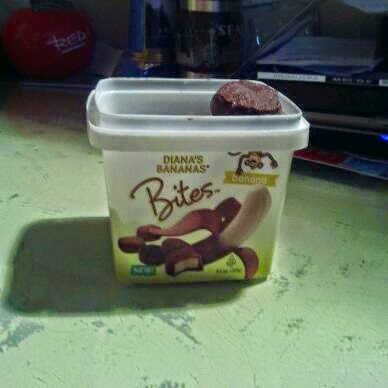 and had to grab it.  When I was younger, my friend's grandmother made chocolate covered frozen bananas.  I rarely was invited to enjoy them, but I loved it from the first bite.  I'm a nut for chocolate as well as bananas.  When I saw this container of frozen chocolate covered banana slices I grabbed it and never looked back.  It turns out they're coated in dark chocolate according to the package, but they didn't really taste like dark chocolate.  Regardless, it was pretty good.  Yum!

Well, I guess that's it for now.  Hopefully I can find the USB cable for my camera so I can share images of my new horses.