So, yesterday I had the day off in observance of Martin Luther King Jr Day.  The state made it an official day several years ago, but it was only in the past 5 years or so that my company decided to give it to us off in an effort to show they embrace diversity.  Or something like that.  Anyway, having Monday off means Tuesday becomes the new Monday, but we'll get to that.

I didn't do much over the weekend.  My mom had an eye appointment at Wal-Mart Saturday afternoon so we decided to do our WM shopping then and the regular store shopping Monday.  Normally we'd do both of it Sunday, but there was the PF Chang's Rock N Roll Marathon and Half-Marathon that would pretty effectively trap us in our house for much of Sunday unless we wanted to go way out of our way, which we didn't.  Back to the eye appointment.  My mom had cataract surgery on her left eye back in 2008 and two years ago the DMV sent a letter saying they'd been notified of an eye condition that might prevent her from seeing well enough to drive and they wanted her to go have her eyes checked.  So she did and the doctor cleared her and all was well.  Then last week she got a letter from the DMV saying they wanted her eyes checked again so that's why she went to the doctor on Saturday.  She went to WM because that's who cleared her last time.  Well, apparently now they required some sort of Field of Vision test or something and WM didn't have that machine so now we both have eye appointments at LensCrafters this Sunday afternoon.  Oh joy.  At least the doctor at WM didn't charge her for the visit.  He said he didn't like his patients having to pay twice so he wasn't going to charge her anything.  It was stupid, though, because when she called initially, she could barely understand the person on the other end of the line so she hung up on them and called the doctor directly and made the appointment for 2:30pm.  Well, early on Friday someone from WM called to confirm her 9:30am appointment.  Huh?  Okay.  Whatever.  Earlier in the day is more convenient.  But then Friday night we get ANOTHER call from WM confirmed her 2:30pm appointment.  Good grief.  We confirmed we'd be there at 2:30pm and that was that.  We arrived at WM about 1:15 and did our shopping then went to the eye appointment.  Sunday I realized we hadn't gotten a main ingredient for Sunday's dinner while at WM so I had to go out to get it.  Well, our closest store is less than a mile away and while they had chicken breast, it was frozen.  Not just the package but the chicken breast itself had ice crystals on it.  Since we needed it for dinner that  night it wouldn't do any good to buy frozen chicken so I decided to see if I could get to Albertsons or if I was going to have to get on the freeway to circumvent the marathon course.  Fortunately, though, I didn't need to because the half-marathon was over by then and the roads had re-opened.  Yay.  Anyway, on Monday mom and I went to breakfast at Denny's then did the rest of our grocery shopping.  I felt I was very un-productive all weekend.  There were things I wanted to do, but wasn't able to or just simply didn't do it because I got too lazy.  hahaha.  Oh well.

Yes, I know you really wanted to know all of that.

So last night on Blab someone had posted that the Collector Club model was now available for pre-order.  Yay.  I've been waiting for this one as I have the Premier Club Kalahkaari and the RR Palomino Marwari.  But there was a slight twist.  It wasn't just a plain model...it comes with TACK 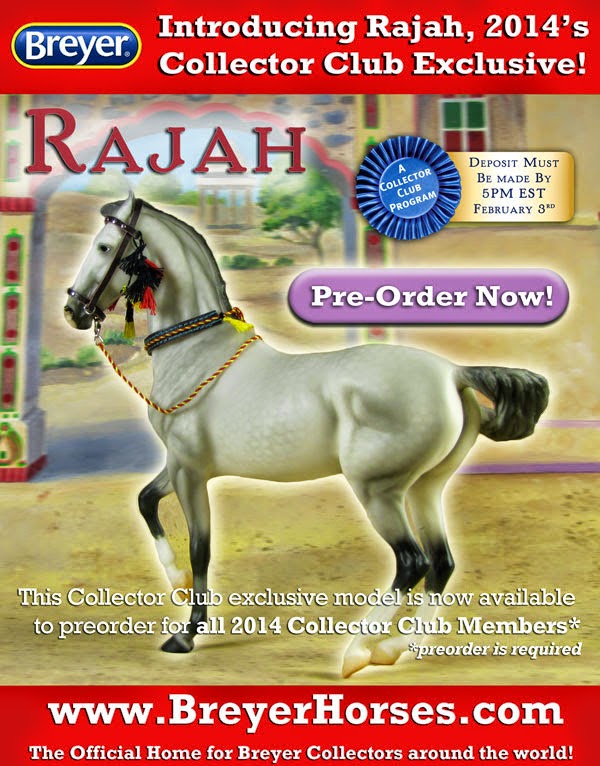 Nothing major. Just a traditional halter and neck ribbon, but still pretty cool.  Needless to say I had to put in my pre-order right away.  I can't wait to get him.  His dapples do look a little reptilian, but I can live with that.  It's not as bad as what's on Valiant, in my opinion.  Also over the weekend, someone wrote on the Peter Stone Horses Facebook wall to please bring back the 2013 blaze on the Design-A-Horse since the 2012 blaze was available all during 2013.  Whoever is responsible for the FB page said they'd ask "Julie" on Monday if that was doable because she thought it was a good idea.  Well, yesterday we got a report back that Julie also thought it was a good idea so they'd put it back up.  Yay!  Initially, though, they listed 2014 blaze twice (plus the thin 2014 blaze) so I pointed that out to them on FB and they fixed it.  Now I can order a DAH to resemble one of my favorite Arabian stallions *Muscat!  Hurray!!!!!!!!  I can't wait.

So, back to having two Mondays.  I stopped at Einstein Bros Bagels this morning on the way to work and when I took my money out, somehow my hand got bumped and my $20 went flying and...disappeared.  It wasn't my only money, mind you, but it was still a $20.  So I searched and searched my car for that dang thing before finally finding it between the passenger seat and the center console.  Okay.  No problem, right?  Wrong!  I couldn't get my hand down in there and each time I tried, I pushed it further in and eventually I couldn't even see it.  I couldn't go in from the back seat because it was too far forward.  I was starting to consider going inside Einstein and asking one of the cashiers to come out and help me.  I know her pretty good so I was pretty confident she'd help, but then I thought to try to move the passenger seat as far forward as it would go and see if that would help and viola!  I was able to retrieve my money and get my breakfast.  Yay!  Then I stopped at Circle K (a convenience store) for gas and I was only going to get $20, but I was paying much attention and went over the $20 so I decided to get $25.  I ended up with $25.01!  AAAAAAAAAAGH.  Hopefully the bad stuff ends there.  hahahaha.
**Edited to add** I came back here to add something and realized I'd misspelled the word "double".  Sheesh.  Anyway.  Because I'd had to shove my hand around in a space that was too small and the top of my hand was rubbing against the metal seat frame that it goes back and forth on when you adjust it to go fowards and backwards...I now have the makings of a large bruise.  Yay.  It's only red right now, but it hurts and I have no doubt I'll end up with a bruise.  Oh yippee!  Typing is so much fun right now.  hahaha  Yes, I'm whining.

But now I'd better get to work.  It's 7:42 and my shift started at 7:00am.  Thank goodness I work in an office and don't have people breathing down my neck!  Have a great Tuesday everyone!