A couple of months ago we had our quarterly awards ceremony/ division meeting here at work and they had provided us with smoothies from Jamba Juice.  I think there were two or three different flavors.  I don't usually like smoothies unless they're banana, but I decided to try one.  I don't remember the flavor other than it wasn't the mango (or was it peach?  I just remember it was kind of orange-ish looking)  Anyway, I had never had anything from Jamba Juice and I thought it was pretty good, but that was that.  I didn't think of it again until last week.  I decided to see where the closest one was on the way to work and stopped by.  After reading the different types, I chose a Razzmatazz.  I don't remember all the ingredients, but I know there was "berries", "bananas" and "orange juice".  There was at least one other ingredient, but that escapes my mind.  My long-term memory is ridiculously good, but short-term?  Not so much.  Anyway, I ended up buying a smoothie 3 days last week on the way to work.  Yum!  But they can be expensive.  Well, a few months ago my brother bought one of those Nutri-Bullet thingies.  For weeks he made smoothies every morning, but now it's sitting un-used.  We have a bunch of strawberries from a recent sale and I knew we had raspberries, blackberries and blueberries in the fridge and I kept meaning to make a smoothie out of them, but never got around to it.  Then Sunday I bought some bananas, both for eating and to throw in a smoothie.  I did that this morning when I would ordinarily be playing "snooze tag".  Yay me! 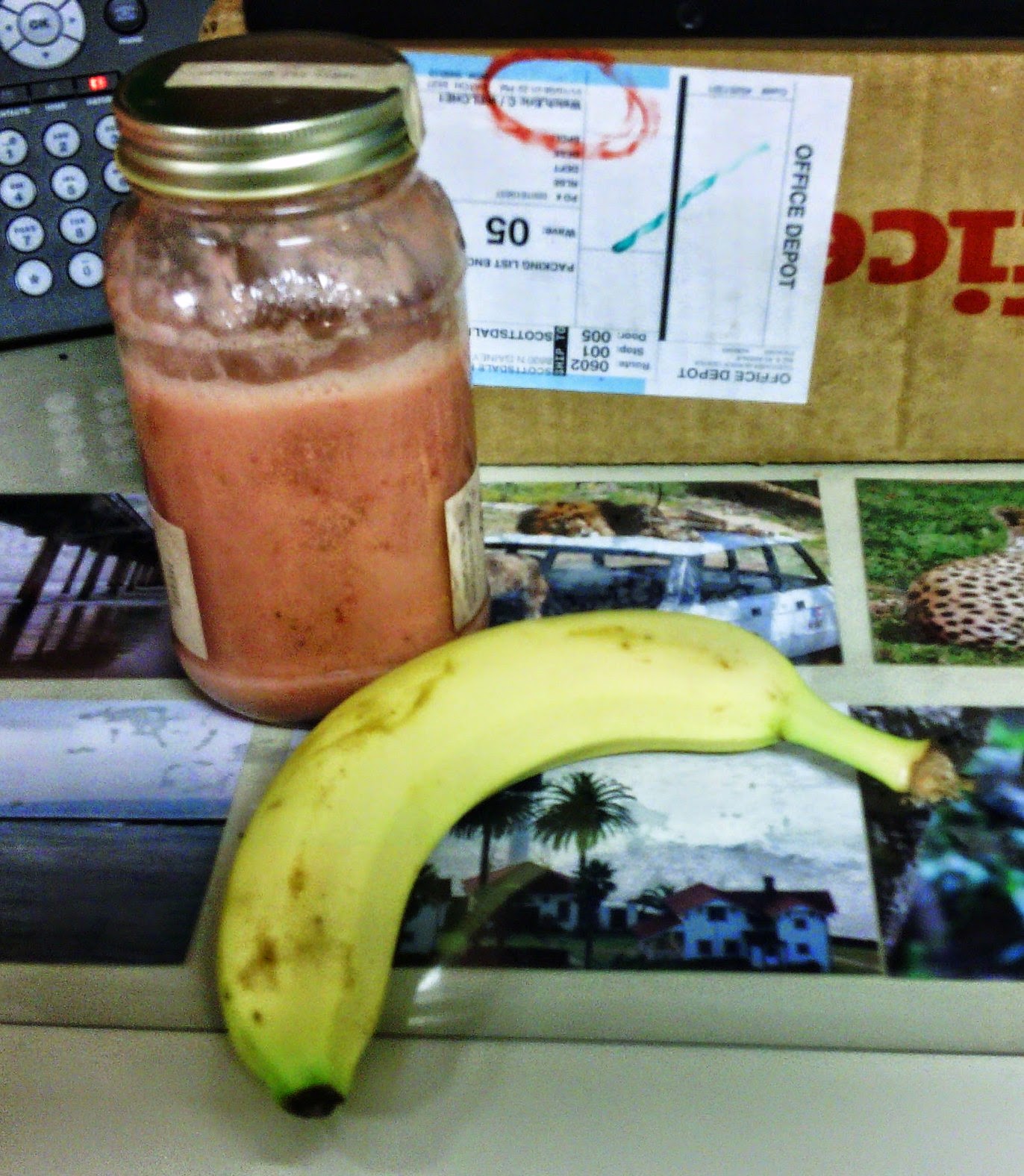 It's not quite as good as the ones from Jamba Juice (I think they use yogurt, too), but it's cheaper for sure.  I couldn't find an appropriate lidded container to put it in so I used a mason jar from an adult beverage product.  Hahaha.  No straw, though, so I have to remove the lid every time I want to drink it.  WalMart has these plastic mason jar-looking things with built in straw so maybe I'll get one of those this weekend.  We'll see.  I don't think I'll make them daily, but it'd be nice to have a better container to drink them out of when I do.  And I feel like I'm making a healthier choice than my usual Peanut Butter Crunch when I have one of these.  Well, of course I am.  There's no added sugar to this thing.  hahaha.

So, a picture of the Single Day Stablemates for 2014 Breyerfest has been posted.  I won't put it here because it's not an official picture and it's really REALLY tiny.  And while I only conga one of the molds they're using, I think I'm going to try to get the entire set.  There's a Silver Filagree, a Silver Charm and two Silver Charm Paints, one with white mane/tail and one with dark mane/tail.  I can't wait until the tickets are finally released and the pictures so I can share them here.  I have a person willing to do pick-ups for me, but she posted an "ad" saying she'd do them and her price has gone up $10 from last year.  I think the Single Day tickets are only $20 and I paid $25 per Stablemate last year, which included shipping.  I do think her time spent tracking them down deserves compensation, but I'm not sure I want to pay an extra $10 per horse.  Her ad did say there'd be a discount if the entire set was purchased and she and I haven't talked cost yet so maybe she'll cut me a deal for being a repeat customer.  She sent me a message last night and said she'd be willing to get the SMs for me this year (she wasn't sure before if she was going to try for them) and I said we'd have to see how much the tickets were etc etc so there was the opportunity to discuss costs.  I didn't feel comfortable to just flat out ask her how much it would be, especially since the price hasn't been released yet.  And last year they did some kind of Groupon thing so we'll see if they do it again.  There's too many variables without the release of the models to help with things.

Well, yesterday the new puppies met the cats.  We had them on a leash...the dogs...and let the cats out of my room.  The cats just kind of sat there while the dogs sniffed and whined.    Then we put the dogs in another room and let the cats out to roam for a couple of hours.  A couple of times when I had to leave that room (the living room where we were watching TV), the dogs managed to get out and promptly chased the cats back to my room, so that isn't very good.  We figure we'll do leash introductions for the first few days then take them into the other room and let the cats out and hopefully by the end of the week the dogs won't chase them anymore.  We'll have to wait and see.

My allergies are KILLING me today.  I sneezed almost all the way to work.  We had several days last week of really windy days and it was a little windy yesterday, too, and since I live in the desert, a lot of dirt gets stirred up.  It's supposed to be windy today, too, but with a temperature of only in the mid-80s.  Tomorrow it's only supposed to be 78 or 79, which is really unusual for this time of year, but I'll take it!  But this sneezing is driving me nuts!

Time to get to work.  Happy Tuesday!