So, earlier today I caught part of the Hunter Derby at Devon and learned that the Grand Prix would be starting at about 8:20pm, which is 5:20pm Arizona time. Perfect since I would be at home and not really having anything to distract me from watching the Grand Prix. Or so I thought. I couldn't even tell you what occupied my attention, but it was about 6:30pm by the time I finally started watching and by then there was only about ten or so riders left. I got to watch McLain Ward ride his 2nd horse of the evening and jump a clear round. Yay. He would end up having two horses in the jump off as would Paul O'Shea, the eventual winner, and Laura Chapot. But that's not the scary part.

The last rider to go was a girl named Lisa Jacquin aboard Chapel Z. She already had a couple of rails down when Chapel Z took off and, the best I can describe it is he dropped his legs mid-jump and kind of flailed. Lisa fell off, which was instant elimination, and Chapel Z partially fell. Lisa tried to hold onto the rains, but he broke free and took off running. For probably a good minute he ran around the Devon Oval with his bridle dangling underneath him, getting tangled up in his legs. That was the scary part. I was so scared he was going to get hurt, but fortunately the bridle came off entirely and someone was able to catch him. He didn't appear to be injured, which was a relief. Certainly not what I'd like to see.  I know serious injuries are always a possibility.  I don't watch Steeplechase because of all the injuries and I stopped watching thoroughbred racing mainly for that reason, too.  That and I don't like them racing 2 year old horses.  But that's a different matter entirely.

So, congratulations to Paul O'Shea and his horse Primo de Revel. Todd Minikus and Quality Girl for their 2nd place (by 7/10ths of a second!!!) win and McLain Ward and Rothchild for coming in third.  It was definitely an exciting jump off.  Here's a photo of Paul and Primo at a competition in Palm Beach, FL in 2013.  The image from Mancini Photos 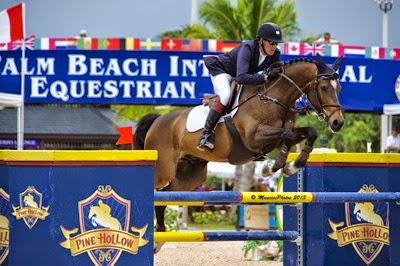 Tonight is the season premiere of North Woods Law on Animal Planet.  It's a reality show, similar to Cops, about game wardens in Maine.  Sometimes it's hard to watch, but I'm always happy when they catch the bad guys.  It comes on in about 40 minutes and I'm hoping I'll be able to stay awake long enough to watch it.

Tomorrow is Friday.  Yay.  I anticipate another busy day at work.  We changed job duties on Tuesday and I've been busy every ever since.  I like being busy, but not so busy I worry I won't get everything done in time and that's how I feel right now.  Add to that we start training next week on a new system we're about to roll out and I'm starting to get a bit stressed.  Oh yeah, and my unit is moving to another building in a month.  Things won't lighten up for me for quite some time.  <sigh>