I've loved to read for a long time.  I can't pinpoint learning to read or where I officially became a "Reader", but I am one.  Both of my parents are/were (my dad is gone), but not so much my brother.  He'll read magazines and that's about it.  I was at a new job once during break and I was reading the back of a cereal box.  One of my co-workers said something to the affect of "Oh, you're a reader, aren't you?" like it was a bad thing.  How can reading be a bad thing?  Oh well.  Anyway, I was one of those types that had lots of books at any given time plus a bunch of magazines and I was often found reading something, even if it was just a cereal box.  Then technology started happening and I bought my first e-reader, a Nook 3g/wi-fi.  From there I graduated to a Nook Color and now I have an iPad Mini.  My taste in books hasn't changed a whole lot over the years.  Mostly true crime stories and horse books.  I used to read a lot of romance books, but I don't so much anymore.  At least, not the Harlequin Romance-type that I used to gobble up like there was no tomorrow.  Anyway, my main story topic choice, of course, is about horses, but therein lies a problem.  Most horse stories are written for pre-teens and teenagers so what's an adult horse nut do?  Well, sometimes you read the books aimed at the younger person because they're not horribly bad.  I've started a couple of series that ended up being way too young for me, but for the most part the stories and characters are relatable in that we share a love for horses.  There's a couple of series I read right now because I know there'll be another book coming down the pipeline in the future and that's something to look forward to.

Usually, the best kind of horse stories are the ones written by people who have horses or have had them in the past, preferably the recent past, but that's not always the case, which is why I'm writing this review.  Let's face it.  I've been around for awhile.  I'm over 40.  I know a thing or two about horses so I get offended when an author talks down to her (I almost always prefer books written by women) readers or makes stuff up.  Too many authors write huge tragedies into their stories such as a horse having colic and dying, usually during a major weather event or just having colic and the main characters having to save the horse in some drama-filled chapter.  I know they write that stuff to keep the reader engaged, but does EVERY author have to have a colic episode?  No.  One story I read, one of the characters had a riding accident.  Not out of the realm of possibilities.  I know from experience riding accidents are unpredictable and quite common.  That wasn't what I had the problem with.  It was when one of the characters called for a medical helicopter on his cell phone and they landed it in a field full of horses.  For one thing, a private individual can not just call up the airport or hospital and request a medical helicopter to come.  That's something done with a coordinated effort between the fire and police departments.  Also, they wouldn't land a helicopter in a field full of horses.  With all the debris that is kicked up plus the noise, they'd cause more harm than good because there'd be a lot of injured, panicked horses as a result of that.  I *think* I finished that book.  I don't like to not finish a book since I pay money for them.  Every now and then I'll have to put it down.  The last one I got for free, though, so I had no problem not finishing it.  In that one, the main female character was always complaining about how she'd resented her mom for letting men walk all over her and she herself ended up getting bullied by her new boss, whom she was also having a sexual relationship with.

This latest book I started I paid more for than I generally do and that's when I really dislike having to give up on it.  The book is called Kick On and it's by Kelly Jennings 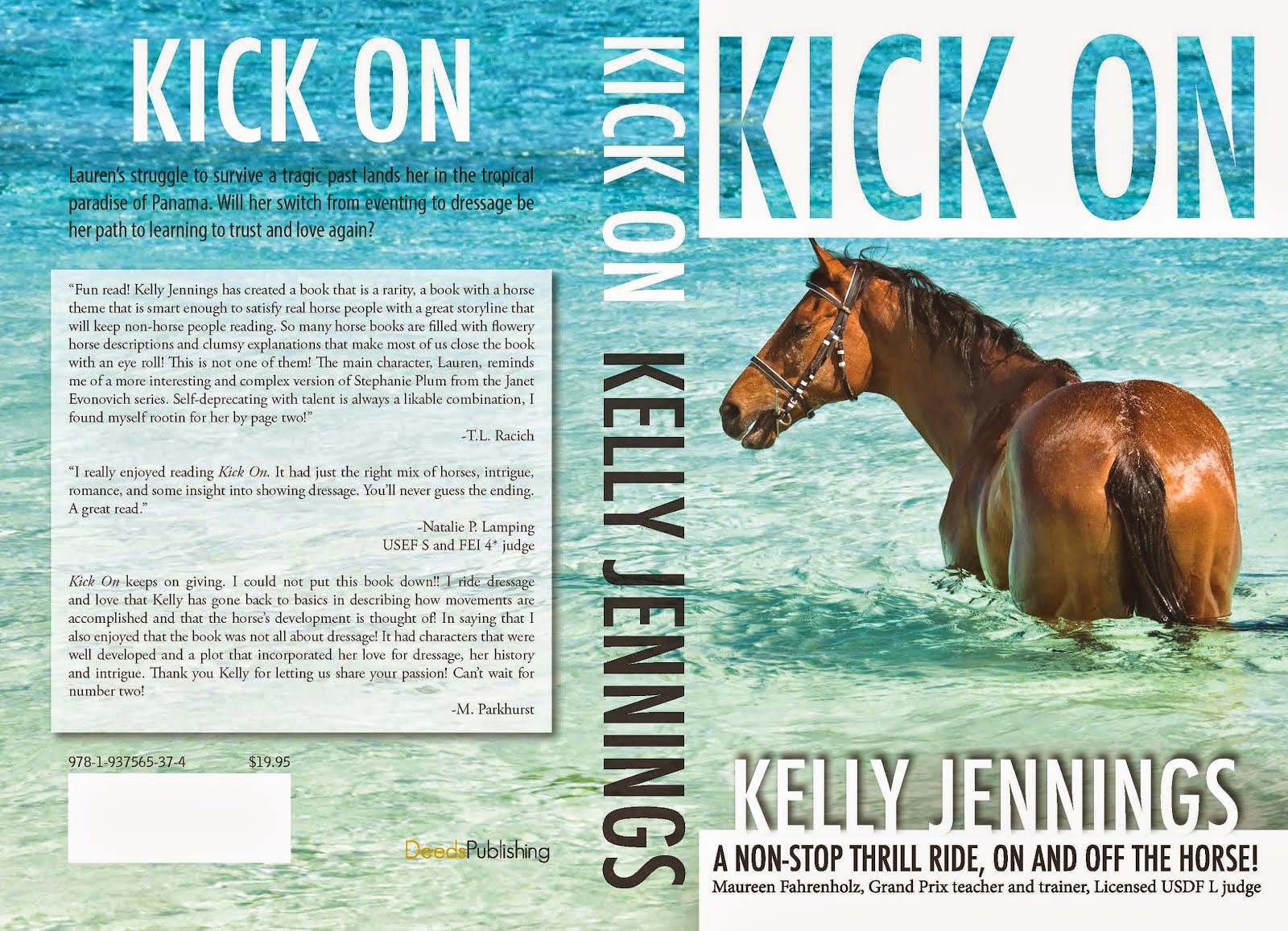 I had it sitting in my Amazon wish list for awhile so when I finished The Next Door by Gayle Sliva I bought this one.  It started out decent enough and I thought it might be a good story, but then it started getting a bit ridiculous.  Basically, the story was about a young woman who'd been a successful eventer in the US, but then her mom died and her fiance died and she sold her horse and she and her little sister moved to Panama where their dad had moved for a job.  She quickly discovers a training barn and makes friends with some of the other riders and she decides to start competing again, but this time in Dressage only.  There were lots of details written into the story, which can be good or bad.  I know I struggle sometimes with my own writing and knowing how many details to include.  Too many and you annoy the reader, but too few and your reader never gets a good picture of anything.  Details help tell the story and show how things look.  But what ended up being the stopping point for me, the proverbial Straw That Broke the Camel's Back, was when the main female character was having dinner with someone and she was telling him about eventing.  Her favorite part of eventing was Cross Country and that's what she was telling him about it.  She said it was a timed event and if you cross the finish line too soon you were given time penalties and if you crossed too late, it was like a speeding ticket.  Huh?  Since when do you get time penalties for finishing the course too early?  I decided I was going to write a review on Amazon, but before I did that, I looked up the rules for Cross Country just to make sure I wasn't saying anything incorrect and it was there in the rulebook...the only time penalty is for crossing the finish AFTER the time allowed.  I mentioned that in my review and the author replied and said that when she was eventing, that's what the rule was.  Okay.  Maybe a LONG time ago.  But this is supposed to be a MODERN story so she should have made sure she knew the current rules.  Maybe she didn't expect her readers to know anything about the spot and that she could get away with it.  Who knows.  Maybe I should just stick with books about little kids so I'm not expected to know anything about horses.   hahaha.  I just wish someone would write a decent story about adults and horses that isn't full of hate-filled terrorists who kill horses for revenge or yet another horse that has colicked (that spelling doesn't look right) and had to be put down.

Congratulations to Brianne Goutal for winning the Old Salem Farm Grand Prix yesterday.  I was hoping McLain Ward would win on Zander because he's been around awhile.  He was first to go in a field of 8 for a jump off and had a VERY good time, but Brianne managed to beat him.  She actually had 3 horses in the jump off and I knew if anyone could beat him it would be her.  She beat him on her first horse Nice de Prissey.  Her 2nd horse I think she had a rail down and her 3rd she ended up retiring after having two early fences.  Veteran show jumper Leslie Howard also competed as did Georgina Bloomberg, who was celebrating her first Mother's Day.  She's now a horse owner as well as rider.  I don't remember who rode one of her horses yesterday but I remember wondering why she wasn't riding her own horse.  That was before they mentioned she'd had a baby "recently" and figured that's why she wasn't riding, but then a couple of riders later there she was.  She rode two horses out of the 40 that were competing, but I don't remember how she did.  This coming weekend will be another show at Old Salem Farm and Beezie Madden is supposed to compete.  I can't wait.  I've long admired Beezie, Leslie Burr-Howard and Margie Goldstein-Engel.

Well, I guess I'd better get to more serious work than a few things here and there.  Happy Monday!