I'm not sure if I've mentioned this before or not, but I've been riding horses since I was 4 years old so about 39 years, although I haven't ridden since 1999 so I can't say I've ridden for the whole 39 years.  Either way, even 25 years is a lot of time spent in the saddle.  I've ridden at various commercial stables, in a city-run program (got my first fall there), in college (broke my only bone after my 2nd fall ever) and a couple of summer camps.  I even got to ride a police horse once.  So, how is it that despite the massive amount of time I've spent in the saddle, there's only 2...count 'em...TWO photos of me riding?  One was taken at an old west town while on a lead-line pony.  Sorry the picture is blurry but it's a picture of a picture 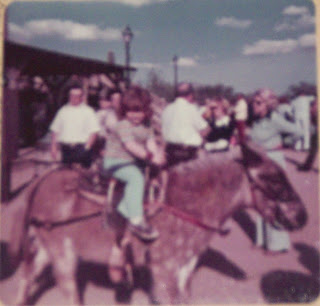 Don't you just love the fashion from the 70s?  This wasn't the first time I'd ridden...that happened in Minnesota a year earlier when we'd spent a month on a family ranch.  I still remember it like it was yesterday.  Hahaha.  The only other photo of me on a horse was the last time I went riding...for my 29th birthday.  A good friend of mine got me (and her) a 4 hour ride in a nearby mountain range well-known for gold prospecting.  Neither of us had done a ride that long, but we were eager to go and it was probably the best birthday gift I've ever received 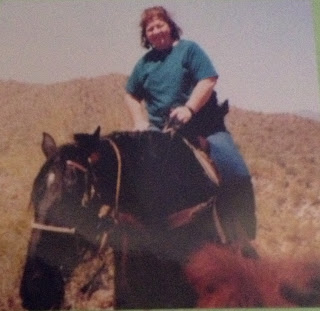 I hate that I haven't been able to ride in so long.  I hate that I don't have more pictures of me on horseback.  I know what I need to do to get back into the saddle but I seem helpless to do it.  It's nobody's fault but my own.  My parents got it started when I was a kid and now I don't know how to stop.  I need to because I want to go riding sooooo bad.  <sigh>

So, in a former life I was a HUGE hockey fan.  I went to tons of NHL games and to player appearances and practices.  As a result, I got to know a bunch of the players.  Not entirely on the fan/player level but on a person to person one.  As such, I knew some of their wives and kids as well. Several hockey wives here in Arizona like horses and have horses.  One player and his family are trying to get sort of a horse country club going that would be open to the public.  For $300 a month you get the use of one of their horses and the facilities.  Sort of like having a horse but not have to worry about feed, vet and farrier bills.  At $300/month, though, only e high income people can afford to belong and could likely afford to keep their own horse and not rent one out from someone else.  But if you don't have time to care for a horse but still want to ride whenever you like pretty much then I guess this wouldn't be a bad set-up.

Anyway, there's one hockey wife I know who had aspirations to be an Olympic dressage rider.  She trained with a well-known rider in Idaho.  Bought her own training ranch in Arizona.  Had expensive, maybe Olympic caliber horses.  Her hope was to ride in 2012 but it never happened, although she was long-listed in the early 2000s. Her 18 year old daughter, however, might end up making a future Olympic team. She's been training with Stefan Peters for 6 years now and moved to California to attend college and so she could be closer to training. Recently she went on a horse buying trip to Germany. She's apparently a very accomplished rider and as you can see by these photos, she has good form 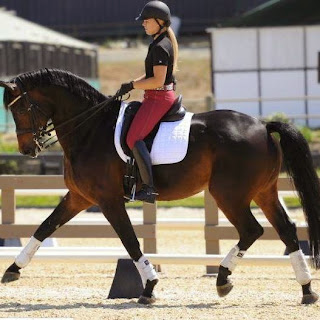 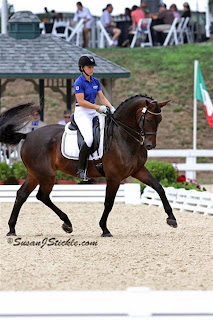 I see pictures and read stories about her and can't help but remember her as a 5 year old and her dad was annoyed with her behavior so he "threw" her into the backseat of the car then spent the next several minutes signing autographs. I told him he might want to roll down the window or turn on the air conditioning because she was sitting in a black car in a parking lot. I was surprised by his treatment of her that day. I'll always think of her as that child, though, even if she makes the Olympics. It would be cool to know actually know someone on the US Equestrian Team.
Posted by Brenda at 11:33 AM