When my mind starts to wander...

I'm not a creative person.  At.  All.  I have a creative mind, but there's a short-circuit somewhere between the creative part of my brain and my hands to execute it.  Except on rare occasions and even then it isn't exactly art museum worthy.  hahaha.

When I was in high school I was in Study Hall and was bored.  I had a large white cup on my desk and a pen so I started to draw on the cup.  21 Jump Street was a popular TV show at the time and so I drew a picture of a stick figure riding a stick figure horse over a jump with people watching in the background.  The tie-in to the show?  The rider's number was "21" and she was jumping.  Get it?  hahaha.  Stupid, I know.  A friend of mine saw my drawing and said she wished I would get bored more often.

Fast forward to yesterday.  My company is developing a new claims system and we had a demonstration for it yesterday.  We were told to bring only a pen or pencil because we could write notes on our hand-out and also to leave our non-company cell phones behind so we could give them our un-divided attention.  Well, my phone was in my pocket, on vibrate.  No big deal.  I brought my pen but also a drink because I'd been coughing all afternoon and didn't want to disrupt the class.  I wasn't the only one who did, though, and a couple of people also brought notebooks even though we were told not to.  No big deal.  We went over the hand-out and the slide presentation then went back and they went through the hand-out, page by page, to see if anyone had any questions on the different things we'd talked about.  That's when my mind started to wander... 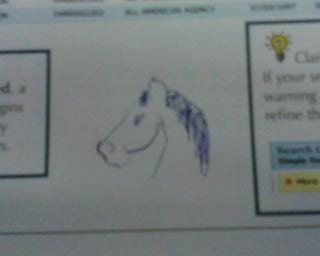 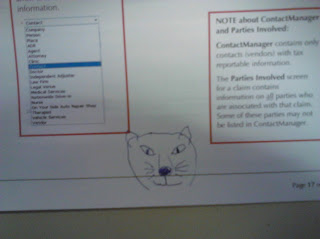 As you can see, I definitely didn't get the artistic gene in my family.  My paternal grandmother painted with oils.  My dad's sister has made a career out of mixed media (mostly painting) and my brother is pretty good, too.  He'd be better if he took classes or something.  My dad had an eye for photography and I've gotten that from him.  My mom used to like short stories and I got that from her.  So I guess I am a little artistic, but not as well as I'd like to be.  I can't draw something and make it look like an actual photo or really realistic.
Oh well.  I envy those that can do stuff like that and am happy for their talent.

Guess I'd better get to work.  Today is check cutting and I'm already behind on other things.
Posted by Brenda at 7:20 AM