I've always been a huge fan of the unusual angle in photography.  In my own picture-taking, I always try to see the subject differently so my photos don't turn out looking like everyone else's and for the most part I've been pretty successful.  I used to know one of the Shamu trainers at Sea World California and on more than one occasion she'd commented that my pictures were unique because I didn't always photograph what everyone else did.  When animals or objects are moving, however, it's not always easy to get a funky angle, but when you're taking pictures of a static item such as the Space Needle, the Eiffel Tower in Las Vegas or model horses it's a little easier.  In a previous post I mentioned I was going to showcase some of Char's (from charart.wordpress.com) photos because I liked the angles she used.  I tried finding more on Google, but most of the photos are your standard side shots or looking head-on so I won't have many photos to show.  Char did send me some additional shots that weren't on her blog, but sadly the email disappeared from my inbox.  I fear I accidentally deleted them.  Anyway, the photos by her are used with her permission.  The other two I found on Google images and one has the artist's watermark and the other I have no idea whose it is, but it's not mine.  hahaha.  We'll start with Char, though, since it's her pictures that inspired the post. 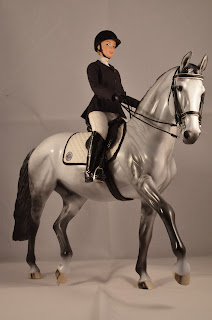 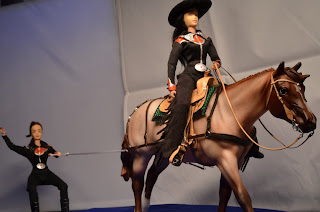 This one above isn't really a funky angle, but I wanted to share the complete set-up for it because it's really creative.  I've heard of this type of skiing before and have maybe seen it on a TV commercial or something, but to do a performance set-up on it is really something!

This next photo is by "CatWink" on Deviant Art. 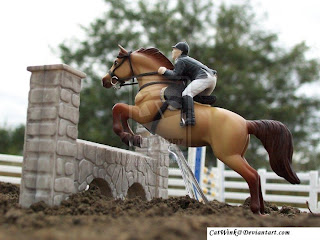 I really like how she got down to ground level and shot the horse as it was going over the jump instead of the front  or a direct side shot.  If I was judging a photo show I would probably place this photo near the top simply because I like how the picture is done.  Of course, I'm not real sure the rider's position is correct so that would be a problem with placing it high.  hahaha.  Good thing I don't hold photo shows anymore, huh?

Finally, there's a photo that I'm afraid I don't know the owner of it.  When I clicked on the link for the originating website it took me to Facebook but there wasn't any other information.  Hopefully, whoever it belongs to won't mind if I post it.  It's a good photo and I'm not trying to claim ownership of it and I think that's what a lot of people have a problem with when it comes to photo usage...people claiming ownership of photos that aren't theirs.  And it's not like I have a huge readership going on.  hahahaha. 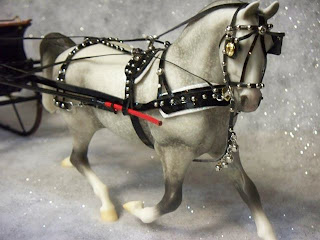 If any of you out there know of some pictures that have fun and/or funky angles or you have photos yourself and would like to share, please feel free to email me.  My email address can be found under "about me" when you click on my name.
Posted by Brenda at 7:40 AM