Attack of the Big Heads...

A couple of weeks ago Breyer had a special over the weekend where they offered free shipping. They were also having a "Warehouse Finds". I think this is the 2nd or 3rd time they've had "Warehouse Finds", but they'd never really had any models that appealed to me, but this time they did. With the Warehouse Finds they basically take a retired model and maybe do a minor change or two then re-release it with a different mold number. In the case of mine, it was originally mold 1310 - Prancer (from the Saddle Club) that was re-released as #430010 - Thoroughbred - Chestnut. From looking at the picture on ID Your Breyer and comparing it to my model, it looks like they may have darkened her color a bit, but it could just be the lighting. I don't have the original Prancer to compare it to. Anyway, I've long been a fan of the Halla/Bolya mold, even though I only have the original Halla so I jumped on this one, especially since it was at a reduced cost 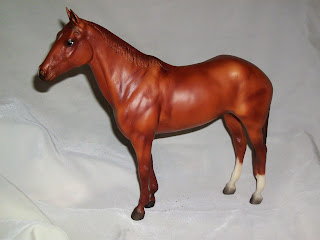 I also finally got my Collector Club model Rajah, who is pretty neat-looking 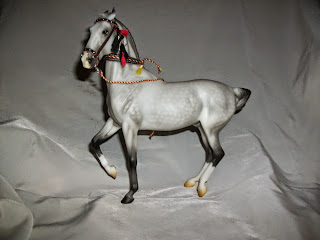 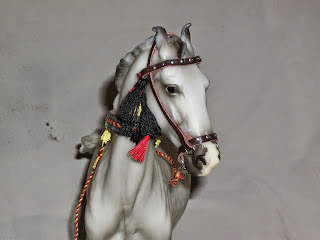 It took a little while to figure out how the halter was supposed to go, but I finally did. Obviously.

So then I got a couple of dolls. Not for showing since I don't show and I don't have decent tack to use and, well, let's face it. The Breyer dolls aren't exactly the best things out there, but I wasn't going to drop a boat-load of cash on something I just wanted to have fun with. If I showed then maybe I'd consider a nicer doll, but these are just for fun.

Here they are terrorizing the new companion animals I got off of MH$P... 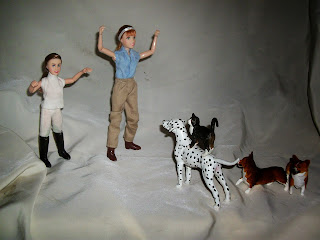 But then the animals strike back and they bring in reinforcements...
You don't look so menacing now, do you? hahaha.

Anyway...Breyerfest was this past weekend, as many of you know. I was supposed to get a couple of models picked up, but I ended up having to cancel that, which totally sucked, but all is not lost. I was able to get a Platinum Star off ebay for a good price and it'll arrive unopened so I'll still get the thrill of opening it...and the possibility that it might be one of the rare silver edition ones. If it is, I might look at putting it up for offers...just to see what I can get. But if it's a regular one, I'll keep it. I don't know when he'll arrive. I got a shipping notification yesterday, but no exact arrival date. My Silver Florentine Time To Party Misty should be here on Friday. I'm still debating whether I'm going to try to make an honest run at going next year. I heard some horror stories about this year's crowd and the rudeness of people, but I also heard some nice stories, too, so we shall see. The theme is Viva La France so it'll be interesting to see what kind of models and stuff they come up with. For the cost of a trip to BF, though, I can go to San Diego in November, like I have already planned, and San Francisco next summer for the opening of the new Africa exhibit at the Fresno Chaffee Zoo. Going to Lexington would satisfy my zoo "requirements" (Louisville and Cincinnatti Zoos) and horses (oh boy horses galore!), but San Francisco would satisfy zoos, beach, lighthouses and possibly some horses. Plus it's a shorter plane trip. I have time to decide, though.

It looks like I didn't win one of the 5 farrier dolls off the Breyer website that I posted about last week.  They were supposed to notify people yesterday and I didn't get an email.  Oh well.  Congrats to those who got one.

Well, I guess that's it for now. Happy Wednesday!
Posted by Brenda at 7:10 AM