What a way to start the weekend!  On the way to work this morning they said on the radio that if you were out and about this evening there was a potential for a dust storm.  Something you learn real quick around here is to not believe the weather reports and should just look out the window.  Well, around 4:30pm when the news came on channel 3 (an independent channel, formerly affiliated with ABC) and they started talking about a dust storm that had formed in a town about 30-45 minutes south of me.  They weren't sure if it would last long enough to affect he Phoenix Metro area and said they'd keep us updated.  It was cloudy outside, but nothing to be too concerned about.

When the wall of dust reached I-10 and Pecos, we started to take more notice as it had moved pretty quickly.  My mom and I started talking about where to go to get dinner as the storm was inching its way closer and closer.  I was going to go get something from Rally's and we were talking about what we wanted when I looked out the window to the backyard and saw it was now very dusty and windy. That quickly changed our plans to getting something closer and we decided on Jack in  the Box.  These pictures were taken on my way there and back 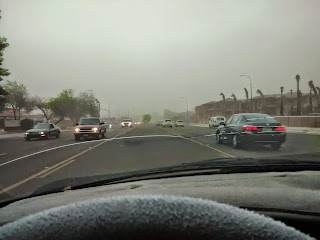 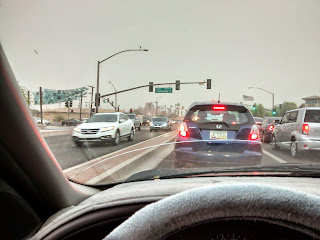 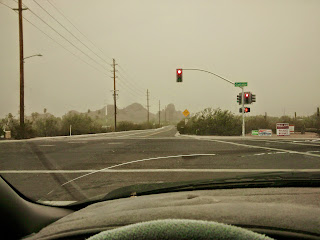 The last picture was taken near my house and is actually the backside of the Desert Lives exhibit at the Phoenix Zoo. Sometimes I can see the Big Horn Sheep on my way home from work or from my house when they're on this side of the hill. It's pretty neat.
Posted by Brenda at 7:39 PM