So, I actually stayed awake long enough to watch the Big Bay Bash in San Diego on my iPad mini.  Initially I watched in with the 'timed music' on one of the radio stations, but I quickly grew bored of that and switched to channel 16 to listen for distress calls.  I then also switched camera angles.  There's five camera on sundiegolive.com and usually the camera moves and the view changes.  I was wondering how that would work for the fireworks and figured I'd catch it as the camera switched to a position where it was pointed in the right direction, but then I realized the camera wasn't moving.  They'd put it on hold so the camera stayed pointing towards the Bay band you were able to watch the fireworks, but the view was kind of boring so I tried a different camera and found one I liked better.  The below pictures are static images from sundiegolive.com camera I was watching. 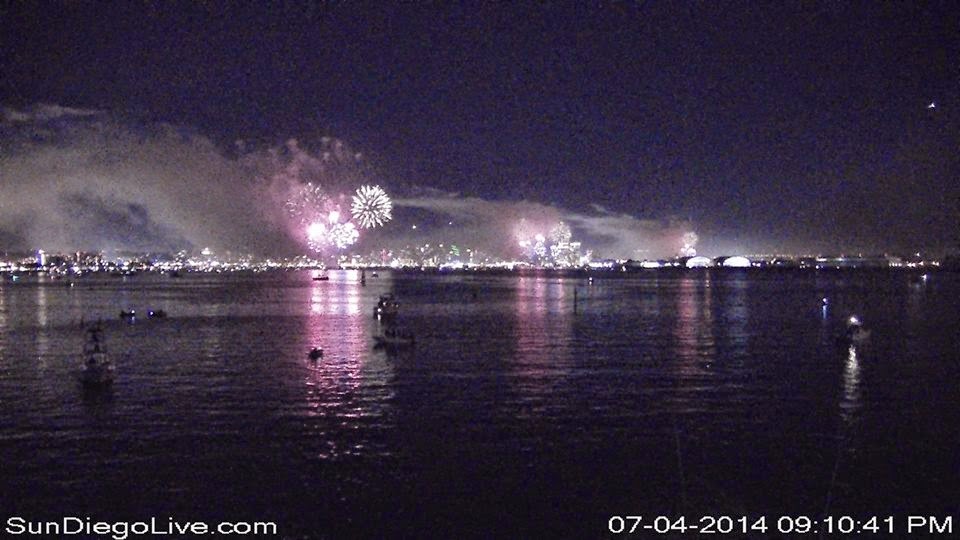 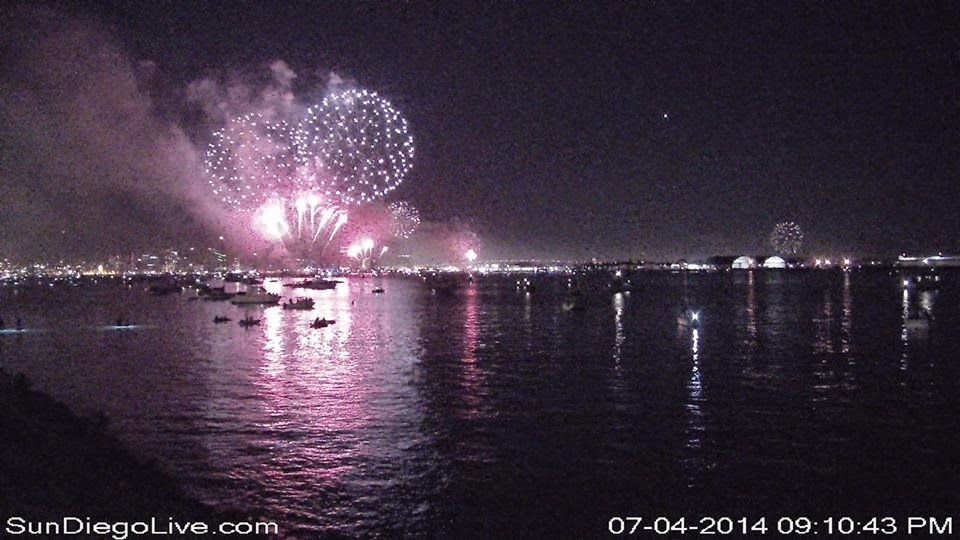 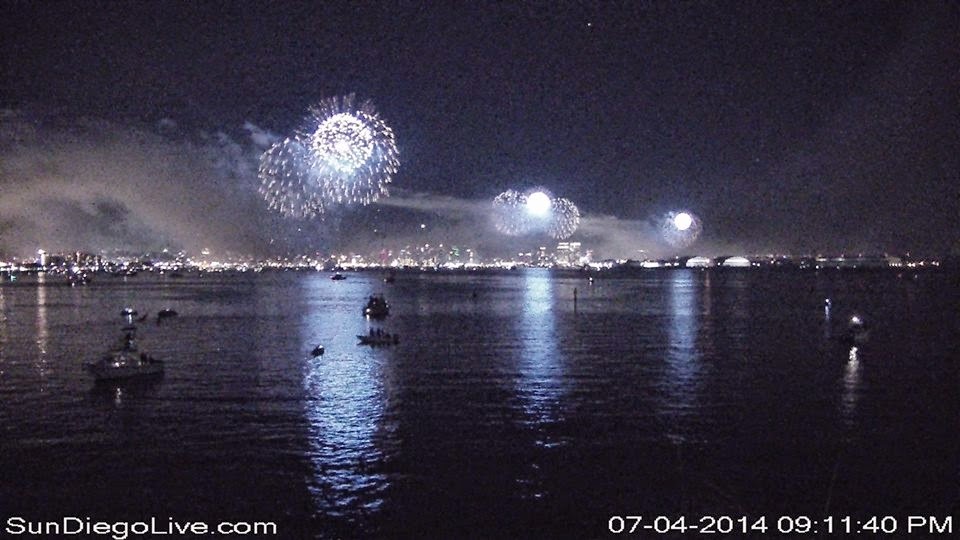 Unfortunately, I missed the Grande Finale.  My mom said there was so much smoke outside from the fireworks at Tempe Town Lake you couldn't see across the street so I went to look.  Good thing I had because it turned out one of the dogs had gotten out and my mom didn't even realize it.  While both dogs are microchipped and have tags, they're mostly black and that would be a disaster waiting to happen.  Anyway, the Finale happened during that time.  Oh well.  It was recorded and put on YouTube so I watched it this morning.

After the Finale I watched the gazillion boats that were on the water navigate around each other and head for their respective marinas and launches.  The smart people stayed put and waited for things to calm down a bit.  I kept switching between channels 16, 13 and even 12 whenever one boat hailed another to switch to a 'talk' channel so I could hear what they were saying.  One of the harbor excursion boats told another boat they were going to stick with them until they reached a certain point then break off for their pier.  A few minutes later Harbor Patrol called the harbor excursion and asked them to switch to ch12 so I did, too.  Apparently the excursion boat had a light out and the HP told them it was a hazard because other boats couldn't tell which side they were approaching.  The excursion boat didn't seem to care because they basically blew the Harbor Patrol boat off.  A short while later a competing excursion boat tried to raise them on the radio, but they wouldn't answer.  Something tells me they thought the competing boat was going to tell them about the missing light and they didn't want to hear it so they just ignored them.  Makes me wonder if they knew the light was out when they took the boat out and they were annoyed with people telling them what they already knew.

It was neat watching the fireworks, even on a streaming webcam.  I haven't been to San Diego for the 4th since the 1980s and then we were down in Imperial Beach with just one set of fireworks as opposed to the six displays for the Big Bay Boom.   In 2008, I think it was, I was at Sea World on the 4th, but where I was standing I could only really hear them and not see because of the trees. The Phoenix Zoo has had a party for 4 years now called the 4th of Zoo-ly that looks like fun, but I've never been to it.  In San Diego, the Cabrillo National Monument has allowed people to watch the fireworks from Pt Loma for $35 per passenger car for just the 2nd year now.  A pretty good deal if you can get 4 or 5 friends to chip in, but not so good if you're by yourself.  Still, it would be a pretty neat viewing place.

Well, I guess that's it for now.  I hope everyone had a fun and safe 4th.  And welcome to my two newest followers!  I appreciate everyone who follows my blog.
Posted by Brenda at 12:27 PM